Dirt and infrastructure work have begun on a $12 million development that will include a 132-unit apartment complex, 15 duplexes and 28,500 square feet of commercial real estate space on more than 16 acres in Tontitown.

Businesses of Brooks Norris, CEO and president of Fort Smith-based Norris Companies, serve as developer, general contractor and owner for the 16.3-acre development at Klenc Road and U.S. Highway 412.

Roger Dickerson, who oversees operations for Norris’ businesses, said the development will include The Reserve @ Tontitown Apartments LLC and the Ruscelli Villas LLC. Norris established the companies in May and July, respectively.

The commercial real estate along the highway includes two lots, and The Reserve apartment complex will be to the south of that. The Ruscelli Villas duplexes will be at the south end of the development.

“We decided that it would be nice to build something where you’re not trying to be the Class A of everything with every single amenity where it’s unaffordable for the marketplace,” Dickerson said. “We also said, ‘Wouldn’t it be nice to connect these two, if someone wanted to transition and get into their own little type of house?’ And the duplexes are real nice. They don’t feel like a duplex.”

The apartments will range from one to three bedrooms. The duplexes will be about 1,300 square feet per unit with three bedrooms and two bathrooms and include two-car garages.

Residents will have access to a 72-unit storage building in a structure that looks like the apartments, Dickerson said. On-site storage was an amenity he learned about while talking to developers and property management groups on amenities people want. Other amenities include Wi-Fi, a clubhouse, pool, cabana with a fireplace and TV, and a 24-hour gym that requires key access. The clubhouse includes rooms for residents to use for events or meetings.

Norris Services & Construction is the general contractor, Springdale-based Engineering Services Inc. is the engineer and Blue Rock Design Build of Fort Smith is the architect for the project.

Architect Brett Abbott said the apartments will have a modern style and low-maintenance materials such as brick, cement board siding, pre-finished metal, stained wood accent pieces and architectural shingles. The buildings will have similar roof lines and exterior features. Floor plans will include bay windows to accent the façade.

“The exterior style shall include clean lines to create an overall updated, modern look,” Abbott said. “Color scheme shall be in the grays and blues tones with stained wood accents to again reinforce the modern look and tie all the building types together to create a cohesive arrangement.”

TONTITOWN FAMILY TRIBUTE
While no specific plans have been determined for the two commercial lots, they might be used for retail or office space. A bank has expressed interest in the site, Dickerson said. It would be a space to complement the overall development, and he doesn’t foresee a gas station being built there. Also, he said a traffic signal is expected to be installed at Klenc Road and Highway 412 over the next year. A 12-foot-wide walking path will be installed along the west side of the development. And, there will be landscaping and decorative fencing as a buffer to the road. 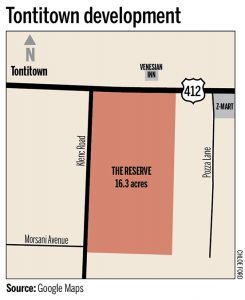 “We’re paying tribute to the Mantegani family … one of the founding family members of Tontitown,” Dickerson said. “Mr. Mantegani, who we bought the property from and that trust, I met with him several times. He has several photos from the evolution of that property. He’s got a picture of him in the early ’40s sitting on his mom’s lap. There was a burger joint and a beer joint on the corner where their tree is sitting right now to the front of the property on the commercial side. There were also bocce courts. They used to have a baseball field there.

“So I’m going to gather all this information, and we’re going to decorate the inside of the clubhouse with that information — kind of pay tribute to the families that have been there and the generations that have been there. We thought that would be a nice touch.” Dickerson said the development will also incorporate other names of founding family members.

“The density profile that is allowable in that area provides something that’s not on the market, and Tontitown is a good market because we knew it was growing,” he said. “Some of our banking partners, Signature Bank being one of them, they’ve got their due diligence in showing the growth patterns. That was a good spot for what we want to build and the size we want to build. We thought that we could build something that gives enough density and profile to the market that will be stabilized much quicker. It provides a need and will be absorbed in the market fairly quickly at a good price point.” He noted that the development will have Class A amenities including granite countertops and stainless steel appliances.

OTHER DEVELOPMENTS
The company also plans to build other apartment complexes in Northwest Arkansas.

“There’s a lot of Class A going in,” Dickerson said. “And it’s demanding a certain amount of market pricing. But at the same token where, why are they going in? Centerton is blowing up for a variety of reasons. We’ve looked there too. We’ve looked into Bentonville and another project in Springdale.”

The company is working on a project in Springdale that is similar in size to the Tontitown development and 350-unit apartment complex with 36 townhomes in Bentonville. Frisco Apartments in Rogers was completed in May and was the first project the company completed in Northwest Arkansas. It worked with Platinum Building Group on the project. While that project was underway, it also partnered with the company on Rupple Meadows, a Fayetteville development that includes three- and four-bedroom duplexes. Norris Development also is working on multiple projects, including 31-home subdivision Springhill Estates, in the Fort Smith area.

“Brooks’ whole goal is to develop something and refine what we’re doing and regionalize it, and even maybe take something into Oklahoma and up in Springfield, Mo.,” Dickerson said.