The economy remains the top issue among Arkansans, with support for anti-abortion laws and the death penalty waning, according to the 2019 The Arkansas Poll which was published Wednesday (Nov. 6).

The Arkansas Poll, designed and analyzed by Janine Parry, professor of political science at the University of Arkansas, is one of the oldest public state polls in the country. It has tracked public opinion on current issues, politicians, the economy and life in Arkansas through more than 17,000 phone interviews in the last two decades.

“Outsiders, but just as frequently those who live here, often presume the average Arkansan holds views markedly different from the average American,” said Parry.  “On most issues, most of the time, we actually track pretty closely with national patterns.”

The Arkansas Poll was conducted between Oct. 12 and Oct. 24. The polling firm Issues & Answers Network Inc. completed 811 telephone interviews among a random sample of adult Arkansans. The margin of error statewide is plus or minus 3.5 percentage points. 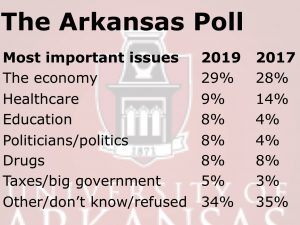 The poll also showed that Arkansans hold views similar to the nation as a whole on guns and immigration. When asked about background checks to buy guns at shows or from private parties, 85% of Arkansans said they should be required while 13% said they should not. Nationally, those numbers are 83% and 14%, respectively, according to a September poll by Pew Research. On the question of creating a red flag law to permit the temporary removal of guns by court order, 85% of Arkansans thought such a law should be created, while 13% did not, results that are within two percentage points of national findings.

Following are other findings based on subject. 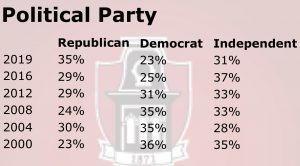 IMMIGRATION
• Asked whether immigrants living in the U.S. illegally should be given a chance to become citizens if they meet certain requirements, 79% of Arkansans said yes, while 19% said no, which is within two percentage points of respondents nationally.
• Arkansans strongly favor hiring more border patrol agents, 73% to 20%.
• Arkansans favor increased construction of walls on the U.S.-Mexico border, 55% to 42%.
• Arkansans also favor deporting all immigrants living in the U.S. illegally, 48% to 44%.

POLITICS, CURRENT ISSUES, QUALITY OF LIFE
The poll also included a variety of questions on how Arkansans feel about their elected representatives, their political affiliations and life in the state.
• A three-point increase in the percentage of people who identify as Republicans (35%) over last year, with a corresponding decrease in those who identify as Democrats (23%) and independents (31%).
• “The economy” ranked as the most important concern facing Arkansas today (29%), followed by healthcare (9%) and education (8%).
An increase in the percentage of Arkansans who say the state is headed in the right direction (71%) and a corresponding decrease who say it is headed in the wrong direction (20%).
• On abortion, 41% of Arkansans surveyed said the process should be made more difficult, down from 46% in 2001. 21% said access to abortion should be easier, up from 13% in 2001.
• The 2019 poll showed that 66% of Arkansans support the death penalty, down from 71% in 2015.

Link here for more information on the 2019 The Arkansas Poll.