Arkansas ranked 7th among the top 10 states most apt to benefit from health care reform, according to a recent study by SmartAsset. The report looked at nine metrics surrounding healthcare from availability and affordability to outcomes.

The report found almost 25% of the population in Arkansas self-reported a fair or poor health status in 2017. The study found that uninsured rates in the state are average with Arkansas ranking in the middle of all states for the percentage of the total population without health insurance as well as the percentage of residents with income below 138% of the poverty threshold without health insurance. Additionally, many people seem to be cost-prohibited when it comes to seeking professional medical advice or treatment, the study showed.

The report said in 2017 that 16.4% of Arkansas adults reported not seeing a doctor in the past 12 months because of cost. This is greater than both the total population’s uninsured rate, 7.9%, and the percentage of low-income population without health insurance, 11.3%.

THE OTHER STATES
The report said southern states comprised the majority of top 10 states in most need of reform with seven states. Arkansas is joined by Florida, Georgia, Mississippi, Oklahoma, North Carolina and South Carolina to represent the south region. In 2017, more than 10% of the population in six of those seven states did not have health insurance and more than 15% of the population in all seven reported that they did not see a physician due to cost at some point over the previous 12 months. 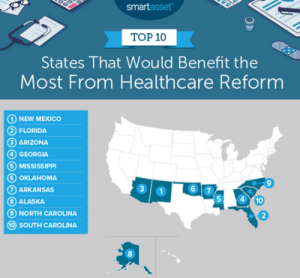 At No. 3, Arizona has higher health insurance premium rates than almost every state. The average annual premium after tax credits for a silver plan under the ACA is $3,936, or 6.96% of the median household income in Arizona in 2017, which was $56,581. Additionally in 2017, the average annual premium for an enrolled employee in an employer-based health insurance plan was $1,554, or 2.75% of the median household income.

At No. 7, Arkansas ranked just ahead of Oklahoma (No. 6) and slightly behind Alaska (No. 8). The report found 14.2% of the population in Oklahoma did not have health insurance in 2017. This is the second-highest rate for this metric of any state in the study, following only Texas. Additionally, Oklahoma ranks in the bottom five of all states for the percentage of children and percentage of low-income residents without health insurance. In 2017, 8.1% of children and 24.1% of low-income residents did not have health coverage.

Despite this, the Kaiser Family Foundation reports that 57.1% of medical needs are being met in Oklahoma. This is the 12th-highest rate of any state. This is because of the Native American population who gets care provided at tribal run hospitals.

Alaska reported 13.7% of the total population and 9.6% of children were uninsured in 2017. The low health insurance rates in Alaska may be partially the result of private firms not offering coverage. The Kaiser Family Foundation reports that only 38.1% of private firms in Alaska offer health coverage, the fifth-lowest rate of any state in the study.

Other findings in the report include Texas having the highest uninsured rates but average health insurance premiums in Texas are typically lower given a large percentage of private firms offer health coverage to employees for reduced costs. In Texas, 19.6% of the population reported they have not seen a doctor in the last 12 months because of cost. This was highest metric of any state.

SmartAsset said there is room for improvement among all states, even those that ranked well for healthcare access and affordability metrics. For instance, Iowa has the lowest percentage of the population reporting that they did not see a physician due to cost, but that percentage is still sizable at 7.9% for something as important as health. Similarly, even though the District of Columbia has the lowest percentage of residents reporting a poor or fair health status, it is still 10.8% for this metric.

U.S. VERSUS THE WORLD
The report states in 2017, the U.S. spent $3.5 trillion – more than $10,000 per person – on healthcare, according to the Organization for Economic Cooperation and Development (OECD). As a percentage of U.S. GDP, healthcare made up 17.1%. This is greater on a per capita basis and as a percentage of GDP than any other country.

“Though healthcare spending in the U.S. is high, it lags in terms of availability, affordability and health outcomes as compared to many countries that spend less, according to a recent International Federation of Health Plans (iFHP) Comparative Price Report. Many Americans, particularly low-income individuals, do not have access to affordable care, making healthcare reform a popular topic among policymakers and politicians,” the report states.

That is, healthcare access and availability along with cost and quality of care differ significantly across income-levels and geographic locations, resulting in a varying ability to save for expenses that healthcare may not cover.