Italian immigrants made their way to Arkansas in the early part of the 20th century. In 1915, the immigrants established Alta Villa, which would later come to be known as Little Italy.

To celebrate the heritage of this community and the significance it had on Arkansas’ history, descendants and relatives of this group of immigrants have worked to gather the history and turn it into something visitors from across the country can use and enjoy.

The Little Italy Arkansas Heritage Society will host a grand opening from noon to 5 p.m. Sept. 15 at a new museum at 33615 Highway 300 in Roland in western Pulaski County. The event will include guided tours, live music, authentic Italian foods and refreshments from Little Italy’s only operating winery, An Enchanting Evening, and Repicci’s Italian Ice. The event is free, but donations will be accepted.

The original idea for the museum began in 2012, said Chris Dorer, the museum’s curator. Work archiving information and artifacts began in earnest in 2015, he said.

“The museum strives to tell the story of these immigrants from their life in Italy to Ellis Island to Arkansas,” Dorer said.

According to the Little Italy website, the community was founded on Dec. 23, 1915, by a group of Italian immigrants who had first moved to Chicago and northern Michigan. It was the last Catholic immigrant colony in Arkansas. 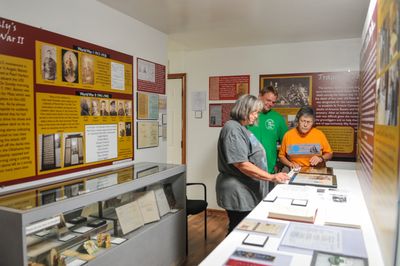 “Arkansas Farms Company advertised in Chicago newspapers that farms of forty would be sold for $10 an acre. When the opportunity to own land in Arkansas was presented, the five original families (Busato, Perrini, Belotti, Granato, and Segalla) decided raising their children in a rural, agricultural setting would be better than in the big cities where crime and overcrowded conditions were commonplace,” the website states.

Situated in the foothills of the Ouachita Mountains, the area reminded of the families of their “mountainous homeland.” The immigrants learned that the land and climate was good for growing grapes, and the community soon developed a thriving wine industry.

By 1920, there were four bonded wineries in the town. Though Prohibition in 1919 threatened to stop the wine production, Arkansas state government intervened.

“In the midst of federal Prohibition, Little Italy’s immigrant wine-producers supplied the region’s consumers with clean, reliable alcohol. The community quickly gained notoriety, becoming a favorite destination of the state’s political figures,” a press release on the museum said.

“Many others were still getting alcohol of some sort, but it often time caused illness because it was improperly produced,” Dorer said. “This is the time when federal and state governments were really at odds and this little community and wineries were caught in the middle.”

The last of the wineries closed in the 1950s, though a small winery, An Enchanted Evening, has since opened at one of the former locations, Dorer said.

The museum’s exhibits look at what happened with those wineries, the families that built them and the community that flourished.

Following the grand opening, the museum will be open 1-3 p.m. Saturdays and noon to 3 p.m. Sundays; admission is free.