The countdown is on for major developments in the effort to put a casino resort – and much more – in Pope County.

A series of Russellville Courier newspaper ads and an interstate billboard campaign began four days ago with a countdown indicating “Your time is coming to be legendary. Project details revealed 8.12.19.”

One ad suggests a hotel complex and another a concert venue, and the reference to “legendary” is tied to the hospitality company Legends, which is partnering with Oklahoma-based Cherokee Nation Businesses (CNB) to gain the sole license to build a casino complex in Russellville. 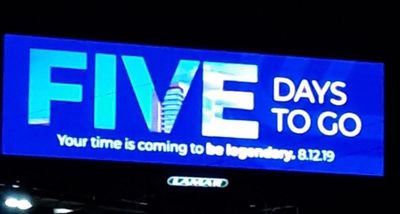 With project details to be revealed on Monday, Talk Business & Politics has learned from multiple sources that county officials are asking for “best and final” proposals from the five different casino groups wanting to locate in Pope County by noon on Monday, Aug. 12. On Tuesday, Aug. 13, the Pope County Quorum Court will hold a specially-called meeting with agenda items that only include:

The “economic development agreements” will reflect the proposals from the five groups, assuming they all submit. One major player with ties to Hard Rock Cafe says it will not. The agreements will include some of the publicly-disclosed plans that have already been revealed, but extra details in terms of community investment.

There has been a lot of local activity over the last several months on the public relations and lobbying front in Pope County as casino representatives try to persuade locals that the casinos to be built won’t be aluminum buildings. Instead, they will be major resort destinations that include hotels, casinos, entertainment options, amphitheaters, waterparks, convention centers, sporting complexes and facilities with other amenities.

In November 2018, Arkansas voters approved Issue 4, now Amendment 100, to allow for expanded casino operations at Oaklawn (Garland Co.), Southland (Crittenden Co.) and new casinos in Pope and Jefferson counties. However, that ballot issue failed in Pope County by a 60-40% margin, and voters there also passed a local ordinance by a nearly 70% margin that requires an election to allow a casino to be built in the area.

It appears that Pope County officials will use a little-known provision in the new Arkansas Constitution casino amendment that does not require a letter from the county judge or a city mayor. The amendment also says that “a resolution from the quorum court in the county where the proposed casino is to be located” can be submitted instead of the single elected official letters. For Pope County, that would require at least seven of the 13 quorum court members to vote in favor of allowing a casino to move forward.

Five casinos originally applied for licenses in Pope County, but were turned down by the Arkansas Racing Commission in June. They included proposals from the Oklahoma-based Cherokee and Choctaw Nations; Gulfside Casino Group; Tri-Peaks Entertainment Group LLC, which would license with the Hard Rock Cafe brand; and the Robert and Ruth Kehl family of Iowa, applying as River Ridge Casino Resort.

Four groups did not have letters of recommendation or the quorum court provision, which led to their rejections from the commission. Gulfside did have letters of recommendation from the former Russellville mayor and Pope County Judge. Those letters were received after Amendment 100 became law and before the former elected officials left office on Jan. 1, 2019, but the Racing Commission decided that a rule and new state law requiring the officials to be officeholders at the time of application required rejection.

The regulatory panel also universally approved a motion to reopen the process to review a new application from Pope County over the next 90 days, if that proposal has a letter of recommendation from local and county officials, or presumably, the quorum court’s approval.

On Thursday, Aug. 15, the Arkansas Racing Commission will meet to determine how to handle the appeal of the Gulfside Casino proposal’s rejection. Most likely, the additional wrinkles that look likely to come earlier in the week could present a new dynamic before the commission.

Without controversy, the Quapaw Nation’s Downstream Development received commission approval in June for a $215 million gaming and hotel complex in Jefferson County on a 385-acre plot of land within the city limits of Pine Bluff. That casino has already broken ground for construction.

UPDATE: Hard Rock Arkansas posted on its Facebook page Saturday (Aug. 10) morning that it would not be selected for the casino project in Pope County, declaring that “another applicant will be granted a letter of support on August 13th.” The post is as follows:

We’re disappointed to share with you that the Quorum Court will be issuing a resolution of support for Pope County next week and it will not be for the Hard Rock Arkansas project. We still believe we have the best long term resort and casino project for the residents of Pope County and we’re grateful for the support that you have given us throughout this process.

Engaging the public is an important part of this process, and getting your input has been a priority of ours from the beginning. We have held events for citizens to give their input on what they would want the Hard Rock to include in terms of amenities and have modified our plans to include amenities that you’ve suggested. That’s one of the reasons why 61% of Pope County residents chose the Hard Rock Arkansas project as their number 1 choice in a poll we commissioned this summer – 6 to 1 over the nearest competition.

In addition to communicating our plans to the public, we’ve also been clear about our willingness to help the county with its needs to offset impacts created by a development of this magnitude. We have assured county leaders, and residents, of our intention to be dedicated community partners and to build our entire $230 million project in the first phase. We have put forth a lifetime charitable contribution plan to lift Pope County up. The proven international Hard Rock brand speaks for itself and we believe we have delivered a project that the people of Pope County can be proud of.

We have now been told that another applicant will be granted a letter of support on August 13th. Remarkably, we were asked if we could submit our final offer after we were informed that a different operator will be selected. This clearly is not what we expected when we started this process.

We have continually asked for a fair, open and transparent process and all of the applicants who have spent a significant amount of time and money deserve this. More importantly, the public deserves this. We still welcome the chance to give a formal, public presentation to county officials and be evaluated on the merits of our proposal.

Should that opportunity arise, we’ll be the first in line to give our best offer.

To all our fellow Hard Rockers, thank you. Thank you for your passion and for all you have done to show your support for our project. Your voice matters. Pope County is a great community that any of these operators would be lucky to be part of.

UPDATE II: A letter obtained by Talk Business & Politics from William “Bill” Warner, President and CEO of Warner Gaming, which is tied to the Tri-Peaks/Hard Rock Cafe effort, claims Judge Cross informed the group on Friday (Aug. 9) “that the Quorum Court has already decided to support the Cherokee proposal and no others…” Warner reaffirms the post produced by Hard Rock Arkansas that indicates they will not submit a proposal “at this time” due to their assertion.