For the previous 13 years, public school enrollment in Arkansas has been slowly growing. The state has generally added a 1,000 or more students each year. We have approximately 480,000 students attending public K12 schools across the state. Over the next seven years, all of that growth, and possibly more, will be erased.

While the state’s overall population continues to slowly grow, the birth rate is falling at a record pace. Forecasts show that after the fall of 2021 public school enrollment will begin an increasingly rapid and sustained descent. And while the decline may officially begin in 2021, its origin goes back to 2008.

In 2008, after several years of increasing birth rates, the number of births in Arkansas – and the entire nation – began to fall. They’ve been falling ever since. The result is a public-school population whose largest cohort is in the 7th grade. The lower grades continue to decline with even smaller populations in the pipeline. This is not a short-term event. We may experience brief upticks or flat enrollment for the next two or three years. But declining K12 enrollment is the new normal and it will have a serious effect on Arkansas’ public policy and private economy.

At least one factor driving the declining birth rate is good news. The single largest drop in the birth rate is among those aged 15-19. The reduction in teen pregnancy actually helps increase high school enrollment and graduation rates in the short term because fewer pregnant teens means fewer dropping out of school. 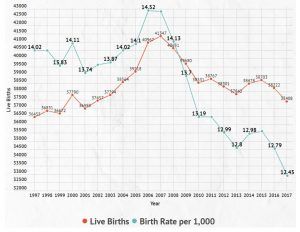 The other drivers are people getting married later in life and waiting longer into marriage to have their first child. The result is that in 2017 Arkansans gave birth to almost 4,000 fewer children than in 2007. That means in 2022, we will have almost 4,000 fewer kids in kindergarten than in the 10th grade.

In fact, by fall of 2021, grades kindergarten thru 8th will be represented by declining birth rate years. The peak birth rate cohort will be in the 9th grade. K12 enrollment in Arkansas will have peaked at around 481,000 students with both the century’s largest (2007) and smallest (2017) birth year cohorts simultaneously enrolled. In the following five years, the state will likely lose more than 15,000 students.

These changes raise the obvious issue of funding and school finance. Arkansas spends about $9,000 per student per year on K12 education. If that per-student number were to stay the same, the state could realize a savings of $350 million over that five-year period. 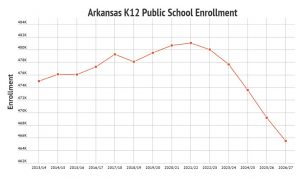 Would lawmakers leave that money in the education bucket by raising per student spending? Or are there other priorities waiting in the wings?

Arkansas has a student-to-teacher ratio of 14:1. In a state with 15,000 fewer students, would districts make the decision to decrease the ratio? Or will they decrease the number of teachers?

If public education in Arkansas were to shrink by tens of thousands of students and hundreds of millions of dollars, the impact will quickly spill over into other industries. The construction and bond finance businesses will definitely feel the effect – and then feel it again when this wave hits higher education. The same will be true for the hundreds, if not thousands, of vendors doing business with the more than 250 public school districts across the state. 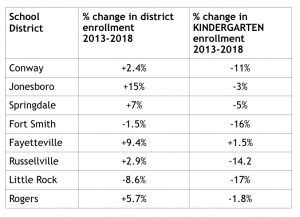 Arkansas’ school districts are almost unimaginably diverse. Unlike many of the other demographic and economic shifts that have taken place in Arkansas, the falling birth rate and enrollment declines will be felt everywhere. Sustained declines in enrollment will eventually make their way through rural, urban, Delta, Ozark, large, small, poor, and well-to-do districts.

During the last six years, 70% of districts have experienced a decline in kindergarten enrollment. More than half of Arkansas’ growing school districts are experiencing a decline in enrollment in the lower grades. And those that aren’t are seeing growth substantially slowed.

A change this large will take time to prepare for and think through. This change creates enormous opportunities and challenges at the policy level. The same could be said for the private sector. How the state responds will affect all of us regardless of generation.

Editor’s note: Jamie Gates, executive vice president of the Conway Development Corp., is a monthly Talk Business & Politics contributor with his column, “Data Points.” Gates will explore data related to Arkansas’ population, economy and demographic trends. The opinions expressed are those of the author.