Mike Beebe’s rise from a tar paper shack in Amagon, Arkansas to the Governor’s Mansion was depicted in an hour-long documentary debuting Wednesday (Aug. 21) at the Arkansas Cinema Society’s annual Filmland festival.

AETN financed the $46,000 production, which will first broadcast on the network at 7 p.m. Aug. 29 and will stream on its website, aetn.org. It’s part of its ongoing “Men and Women of Distinction” series.

Directed by first-time director Kathryn Tucker, the film describes Beebe’s childhood raising by a single mom – a waitress without a high school education. Her travels took them both to Detroit, Alamogordo, New Mexico, and elsewhere before he was educated in the Newport school system. He never knew his biological father and had several stepfathers.

In the film, businessman Johnny Allison revealed that Beebe said during a late night study session at Arkansas State University that he wanted to be governor someday.

Before reaching that post, however, he would take a job at a Searcy law firm, become partner in two years, and win the largest jury verdict in Arkansas history at the time. He met and married his wife, Ginger.

His political career began when he was elected state senator without opposition after the incumbent dropped out of the race. He became the leader of the Senate thanks in part to his command of the budgeting process. Throughout his Senate career and one term as attorney general, he never had an opponent. His first tested campaign was in the 2006 race for governor, when he defeated now Gov. Asa Hutchinson. In 2010, he won re-election, sweeping all 75 counties in a year when Republicans swept into power in state and national elections.

“Arkansas voters are independent enough to distinguish between ‘let’s just vote this ticket or this tide,’” he explained in the film. “They’ll distinguish that and vote for the person over that if they know that person well enough to make that distinction.”

As governor, he presided over an administration that ushered in the state’s Medicaid expansion through the program known as the “private option” and now known as Arkansas Works. During the height of the Great Recession, Arkansas was projected to be one of four states without a budget shortfall. His mantra was to “underpromise and overdeliver.”

“I’m moderate to liberal on most social things, but I’m real conservative about money, and I suppose it’s my upbringing,” he said in the film. 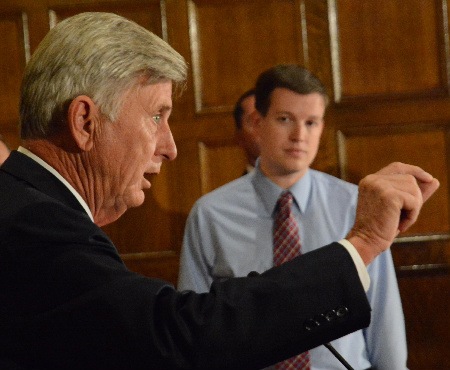 DeCample died earlier in March after a battle with cancer. The film debuted on what would have been DeCample’s 45th birthday. The evening began with a short film paying tribute to him.

Prior to the screening, Beebe said he was interviewed five or six times during the four-year process. He said he was pleased with the project.

Since his first election as governor, Beebe has seen the Democratic Party go from a century-and-a-half of dominance to minority party status.

For a Democrat to win today, he said, “It would have to be cyclical and have to be the kind of Democrat that can reach across party lines. It’d have to be somebody who’s culturally in tune with our people. … The right Democrat connecting with the people the right way can still win, but it’s harder.”

He initially declined to speculate on who those Democrats might be, but did say that Jared Henderson, the party’s candidate for governor in 2018, is “very talented. Presents himself well, articulate, photogenic, smart, command of the issues. (Former state Rep.) Clarke Tucker did a good job. So yeah, there’s some bright young talent out there.”

Beebe, 72, said he would not be a candidate himself for any office.

“There’s not a better political job than being governor,” he said. “Everything else is downhill.”

The film is Kathryn Tucker’s directorial debut after working on more than 50 movies. AETN commissioned her for the project in 2015 for what was supposed to be a 30-minute production. As the work continued, she decided 30 minutes would not tell the story, so the funding was increased to pay for the longer length.

Tucker, an Arkansas native, has worked on projects that include the movie “This is 40” and the television show “Glee.” This was the first time she worked on a nonfiction film, but she said many of the elements are the same.

“To me it’s all about the story,” she said in an interview. “It’s about storytelling, so I really just tried to embrace the story of what was Mike Beebe’s life, and make a movie about that, about his story, as opposed to specific things or specific times.”

She moved back to the state from Los Angeles and in 2017 helped found the Arkansas Cinema Society, which seeks to bring film talent to Arkansas and exhibit and grow the film community here.

The Filmland festival continues through Sunday. Among the other films being screened are “Free Solo,” the documentary about professional rock climber Alex Honnold with producer Evan Hayes making an appearance; the movie “Boy Erased” with director Joel Edgerton; and “Toy Story 4” with writer Andrew Stanton.

Tucker said the Society advocates for filmmaking and educates people about filmmaking as an industry and economic development opportunity.

“There’s 250 people that work on every movie, and most of them make over six figures,” she said. “They’re well-paying jobs, so you don’t have to be Julia Roberts. You can work behind the scenes.”