About five years ago people in the business and economic development world started talking a lot more about a shortage of skilled tradespeople and the quality of America’s workforce.

Since then, those conversations have entered the mainstream and have increased in frequency and intensity. The conversation has now expanded to include topics like the cost of a college degree and the financial return on education. At its best this conversation has encouraged us to think about important topics like jobs of the future, the financial value of education, and even the dignity of work. However, at its worst it has led us to ageism, themes of anti-education, and the passing along of bad information and foolish advice.

To understand why the conversation evolved and intensified it’s helpful to look back at when it started. In 2013, the country was coming out of the great recession. The unemployment rate had fallen two points from its 2009 high of 10%. The recovery was fully underway. At that time, workers born in 1948 were turning 65. 1947 and 1948 were the years we realized the largest annual increase during the baby boom. Baby boomers mass exodus from the workplace was, and still is, landscape altering.

Something else took place during the great recession that would impact the search for talent. When unemployment was high, those companies that were hiring began to increase the preferred qualifications and requirements in their job postings. In short, employers could be picky at 10% unemployment. They could ask a lot of an applicant and expect to find one. However, unemployment is now at 3.5%. Those more stringent job descriptions don’t match the available worker today. Not because the workforce has changed, but because the market has changed.

EDUCATION MUST CONTINUE
As with most complex topics that enter the mainstream, all nuance is lost. When some claim that “college isn’t necessary to earn a good salary” they have a point. There are a number of sustainable and profitable career paths that don’t require a four-year degree – and the debt that comes with it. However, when that statement is followed up with “a good truck driver or welder can make $80,000 a year” they’ve embellished to an irresponsible degree.

The rule still applies that jobs requiring a four-year degree (or more) are in the highest demand and offer salaries and benefits that more than make up for the cost of attending college. Not everyone wants or is able to attend college. And not everyone wants or is able to work in the jobs that require college. Thankfully we have an incredibly broad range of educational opportunities between a high school diploma and a four-year degree. And it is a fact that anyone entering the workforce will need substantial formal education after high-school if they expect to earn and sustain even an average living.

Young workers (18 to 21 years old) have increased challenges finding a meaningful place in the economy. Many commercial truck driving jobs have age restrictions. Manufacturers frequently require, in addition to relevant skills, proven experience in a safety conscious environment. This is why the earliest years after high school are the best time to continue education.

Associate degrees, technical certificates, certificates of proficiency, and professional licensures are all examples of formal credentials that make up the currency of acquiring a job without a four-year degree. Frequently, these are not “negotiable” as a job requirement because state code or insurance requirements will dictate that the work be done by a credentialed professional. And when they aren’t required, they’re frequently the only way to stand out among applicants. Finally, and most importantly, post-secondary education really does prepare you for work after you get a job. 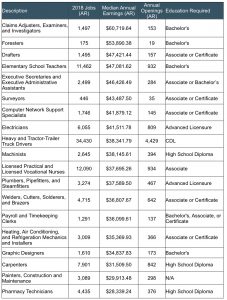 If your goal is increased lifetime earnings, everyone should pursue all of the education they can expect to successfully obtain. If a four-year degree is within reach, get one. The same for an associates or professional certificate. Debt for education is only especially bad when it doesn’t result in a degree or credential. It’s also important to remember that none of these things are mutually exclusive. You can work an entry level trade while going to college. There’s no law against being an electrician with a college degree. In fact, marrying a competency in a skilled trade with a business education is almost a recipe for entrepreneurship.

Arkansas needs a trained and educated workforce to make the most of growing economies. When the economy slows down, a prepared workforce will help the state compete. Those same things are as true for the workers themselves.

THE EXECUTIVE SUMMARY
• The shortage of “skilled tradespeople” is due to a growing economy and baby boomers retiring.
• The shortage of workers with a four-year degree and/or technical talent in Arkansas is a bigger problem than the skilled trades shortage.
• Since 2013, the number of employed persons has grown by 6.7%. During that same period the population has only grown by 2.2%. Tens of thousands of Arkansans have re-entered the workforce.
• As a rule, the more education someone successfully obtains the more they can expect to earn.
• Education beyond a high school diploma (post-secondary) is essential to sustaining even a living wage. The best time to get that education is right after high school.
• The median salary for a truck driver, welder, or plumber in Arkansas is approximately $38,000.