Professor Howard Brill has been at the University of Arkansas School of Law since 1975. He is the first Vincent Foster Professor of Legal Ethics & Professional Responsibility and teaches professional responsibility, remedies, civil procedure, and domestic relations. He teaches special topics courses on Baseball and the Law, as well as Arkansas Constitutional Law.

From September 2015 to December 2016 Professor Brill served as the Chief Justice of the Arkansas Supreme Court, following the untimely death of then Chief Justice Jim Hannah.

Once a year in the Spring, Brill provides a one-hour lecture for the prestigious Rose Law Firm, the oldest law firm west of the Mississippi River.

Brill’s topics usually center on current events in legal ethics. This year, he discussed what will be a major change in potential advertising ethics for law firms as public opinion, loosening tight standards, technology, and free speech issues are allowing firms to more aggressively market their services through traditional and new media channels.

Also, Brill added his thoughts on legal ethics in the wake of the controversy regarding the rule of law as the executive, legislative and judicial branches of government fight over actions of Congress and the White House amidst the national scandals investigated by Special Counsel Robert Mueller and the pending fallout.

Roby Brock: What will you be speaking to the attorneys at the firm about today? 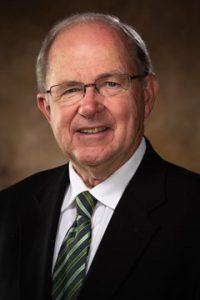 Howard Brill: The first thing I’m going to talk about is that we are two, three or four months away from changing our rules on advertising. We’re going to follow the lead, perhaps, of the American Bar Association. We’re going to allow more ads and more outward ads than we’ve allowed up until now.

So for instance, if these rules are approved by the Arkansas Supreme Court, you may see billboards in Arkansas that say something like: ‘I am Judy Smith. I hired the ABC Law Firm last year. They represented me in a lawsuit against a big truck company, and we won $600,000, and I am proud of the ABC Law Firm, and I’d hire them again.’

Those ads are not allowed now. But the proposal would be up to change the rules and allow those ads.

Brock: Why do you think that’s necessary?

Brill: I think that the mood toward advertising has changed over 40 years and the public is less offended by ads than they were 40 years ago, even 20 years ago. There have also been some constitutional issues that have been raised. If a lawyer can say something that is truthful, then on what basis should the government say you can’t do it?

I think that this proposal that will go to the Supreme Court, whether it’s adopted by the Supreme Court is up to seven justices. My experience is when those justices get in that room and talk about things, they may immediately accept them, or they may say, ‘We don’t like this. We’ll kill this part of it.’ They may ask the public what the public thinks. I don’t know that these changes are necessary, but I think that nationwide, they have been coming. And now that they have been blessed by the American Bar Association, I think the chances are that they’re probably going to be accepted.

Brill: I think that’s the proper way to put it. Law firms that want to advertise should be able to use new technology and new methods, and changing public attitudes toward advertising, to do things they couldn’t have done 20, 30, 40 years ago.

Brill: Let me answer that in a couple of ways. Number one, I think the courts remain vigilant and independent, and don’t feel improper pressure from other branches of government. So I trust the courts.

If that continues, and becomes a prevailing view among most politicians, I would be very concerned. So I’m hoping that this is a temporary aberration. I’m hoping that these attacks on the court system are limited in time and will cease after a while.

Brill: After I left the [Arkansas Supreme] Court, I have spoken to student groups and one of the questions that I had is: how does a judge, or how did I balance and reconcile my personal views or political views or moral views with making decisions?

For me, that turned out to be easy. I, like every person, have a whole bunch of views on every possible subject, but when I raise my hand, I said I’m taking an oath to uphold the Constitution and the laws of Arkansas. I was not taking an oath to uphold my own personal views, and I think that I was able to put aside my personal views in making decisions.

I voted on and wrote on a couple of cases where I had very strong personal views, and in two or three of those, I made the decision that came down that was contrary to my personal belief. I had friends who would, I’m sure they would look at me and say, ‘I don’t understand this. I thought he believed this, and he voted this way. How could this be?

No one ever confronted me on that, but if I had been asked, I would have said, ‘You know, I’m upholding the Constitution. I may not like the way the Constitution has been interpreted by the U.S. Supreme Court, but I’ve got to follow it.’ I think that there are too many attacks on the rule of law now and the independence of judges.

I appreciate it when we have other leaders who stand up and say, I may not agree, but I respect the court. I wrote an opinion just before I left the court on the case involving birth certificates for children of same-sex couples. I wrote an opinion on the case. And in my opinion, I had a footnote. Basically, I think, quoting Governor Hutchinson. Right after that decision, the U.S. Supreme Court came down. He issued an opinion that said something like, ‘I disagree with the Supreme Court, but we will uphold the law in Arkansas.’ I put that in there because I think that’s what elected politicians should say. ‘I may not like it, but we’re going to uphold it.’

Brock: What advice would you give young people thinking about considering law as a profession?

Brill: I think it’s a great profession. I think it is a way to serve the public. It’s a way to serve individual clients. It’s a way to change the law. It can be a way to change society. And if you just think of all the ways in the last 50 years in which lawyers have brought lawsuits, and little by little they have changed the law, I think that is a powerful message to people considering the legal profession. Absolutely.