Greg Kaza, director of the Arkansas Policy Foundation, noted that the state’s 2018 rank marks progress from 2009 – the last year of the Great Recession – when the state ranked 48 in per capita personal income. 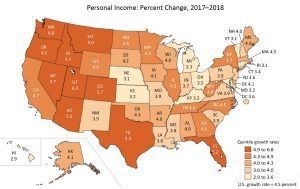 Michael Pakko, an economist with the Arkansas Economic Development Institute at the University of Little Rock, said the state economy finished with an impressive fourth quarter. The fourth quarter 2018 data was included in the annual BEA report.

“Arkansas total personal income surged at an annual rate of 7.5% in the fourth quarter of 2018, outpacing the U.S. growth rate of 5.2% and ranking as the 5th fastest-growing state in the nation,” Pakko noted on his Arkansas Economist blog. “The sharp increase was largely attributable to spike in farm income, which increased at an annual rate of 385%. The increase in farm income was not unique to Arkansas: The only states to outpace Arkansas’ growth rate in the fourth quarter were the agricultural states of  South Dakota, Iowa, Nebraska and North Dakota. Even without the volatile farm income component, however, Arkansas personal income increased at a rate of 4.7% – essentially the same rate as the U.S. total.”

The 2018 full year and fourth quarter BEA reports are subject to revision.