The mailer (see the bottom of this post) discusses Hill’s efforts for veterans in the district and includes a two-question survey asking constituents what veterans’ issues they want to see addressed and how the Congressman can serve the Veterans Administration. It was mailed on August 8, 2018, just one day ahead of a 90-day prohibition on such Congressional mass mailers.

Clarke Tucker, the Democratic challenger to Hill this November, said laws and rules may have been followed, but the mass mailer is not a good use of taxpayer money right before a high-profile, hotly-contested election.

“I actually did receive this mail piece. I’ve been a constituent of Congressman Hill’s for four years and this is the first one of these that I’ve ever actually received,” Tucker said. “I understand that mail can be a good way to communicate with constituents, but number one, the timing of this right before a highly competitive race, and number two, the content of the mailer shows that it serves a blatantly political purpose, and to me, that seems like an abuse of taxpayer funds.”

In addition to the survey, the postcard has a banner tagline that reads, “Congressman Hill is getting results for our veterans” and “Congressman French Hill – supporting Arkansas veterans.” That side of the mailer also notes that Hill is “delivering for Arkansas veterans” by having three combat-wounded veterans on his staff; notes his May 2018 vote for a 2.6% military pay increase; and notes that he is “holding the VA accountable” through another May 2018 vote for the VA Mission Act and a June 2018 vote for the VA Accountability Act.

“Since coming to Congress in 2015, I have sent nearly four million communications consisting of emails, letters, postcards, and mailers to central Arkansans, letting them know about the good work my team and I are doing on their behalf,” Hill tells Talk Business & Politics. “These communications have resulted in tens of thousands of responses, including requests for assistance with matters before the federal government and other constituent services.”

He said the veterans’ mailer focused on his work for central Arkansas veterans “including the $3 million in benefits we have recovered for them so far this year.”

The mailer was sent on Aug. 8, 2018 to just over 157,000 households across central Arkansas at a cost of approximately $51,000 including postage, Hill’s office disclosed.

FRANKING RULES
Rules for Congressional officials using mail to constituents are very clear, even in election years. The practice has been around since the 1700’s and the controversy around the privilege for incumbents is long-standing.

According to the Congressional Research Service, a division of the Library of Congress that produces non-partisan reports to members of Congress, franked mail postage allowances are based on the number of addresses in a member’s district. Federal law, House and Senate rules, and several oversight committees regulate and set the restrictions on the process.

“The franking privilege may only be used for matters of public concern or public service,” according to the CRS website. “It may not be used to solicit votes or contributions, to send mail regarding political campaigns or political parties, or to mail autobiographical or holiday greeting materials.”

“Each mass mailing sent by a member of Congress must bear the following notice: ‘Prepared, Published, and Mailed at Taxpayer Expense,’ it also notes.

Tucker said he doesn’t have specific legislation in mind, but thinks the franking process should be reformed.

“I haven’t thought through well enough what that would be, but I think number one, the timing before the election – that needs to be extended beyond 90 days. And then, if you’re going to communicate with your constituents, you have to actually legitimately seek input and not have 90% of the mail piece be about what you believe your accomplishments to be,” he said.

“I just wonder that with the money that was spent on this mail piece how much we could have actually helped veterans here in Arkansas. $51,000 would help a lot of veterans,” Tucker said. 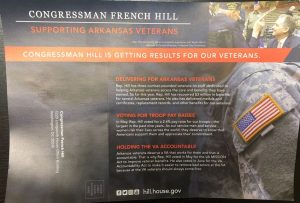 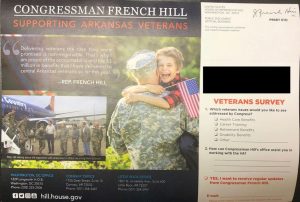