A national civil liberties group that advocates the separation of church and state plans to attend the Bentonville School District’s board of education meeting Monday (Aug. 20).

Nick Fish, national program director of the New Jersey-based nonprofit American Atheists, says the group wants to donate about 1,000 posters to the Bentonville School District at Monday night’s meeting. The posters include both the current national motto, “In God We Trust,” and the original de facto motto of the United States, “E Pluribus Unum,” accompanied by a brief explanation of the changes made to the national motto in 1956.

The donation is in response to Act 911, a state law passed last year that allows K-12 schools to display a picture or poster of the national motto above an American flag in classrooms and libraries. Funding for the posters must come from private organizations or charitable contributions to local school boards.

The bill, sponsored by State Rep. Jim Dotson, R-Bentonville, passed in the Arkansas House 78-1 and in the Senate 20-2. Dotson presented about 900 framed copies of posters to the school board in February.

The posters to be donated by American Atheists include a representation of the American flag, the Arkansas state flag, and a link to an instructional webpage that provides additional historical context and information about the national motto. 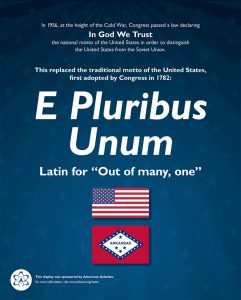 “We’re pleased to donate these displays that present the full truth and historical context of our national motto,” Fish said in a statement. “Proponents of Act 911, including Bentonville’s State Representative Jim Dotson, claim that mandating these displays is about acknowledging our nation’s ‘history and heritage’ in classrooms. But we think students deserve all the facts, not just a poster of an exclusionary and divisive motto devoid of any additional context or information.”

Fish said the posters donated by Dotson in February do not actually conform to the law he introduced.

“We look forward to seeing our displays, which do conform to the law, hanging in every classroom in Bentonville,” Fish said.

The school board meeting starts at 5:30 p.m. at the district administration building at 500 Tiger Boulevard.