This month, state tourism officials are launching a new Arkansas.com website they say offers major advertising innovation available in fewer than half of states.

Tourism-related businesses will now be able to advertise on Arkansas.com, buy placement, and purchase leads generated by the website, which had 4.3 million visitors last year. The model is cooperative and considerably less expensive than traditional media.

“We’re giving the tourism industry of Arkansas their own website where they can advertise for less than it would cost in a commercial market,” said Darin Gray, chairman and CEO of CJRW, the Little Rock agency handling the department’s advertising and marketing.

The Arkansas Department of Parks & Tourism paid $609,446 for the new website, which includes an extranet component for internal use by employees. Sarasota, Fla.-based Miles Partnership, which has offices in Little Rock, built the site, subcontracted by CJRW.

For years, tourism businesses have advertised in the department’s print magazine, the Arkansas Travel Guide, which has 350,000-plus readers – far fewer than the website.

All tourism offices in 50 states have coop advertising in place for similar print publications, but only 22 have it available for websites, said Jay Salyers, Senior Vice President of Miles Partnership, speaking June 29 at the Rogers-Lowell Area Chamber of Commerce. Parks and tourism officials, along with CJRW and Miles Partnership staff, held seven meetings throughout the state the week of June 26 to detail the new opportunities and changes. At the meetings were marketing professionals, hoteliers, members of tourism organizations and owners of tourism-related businesses throughout Arkansas.

On a large screen was projected the new home page for Arkansas.com. The opening image was a blend of video and still photos depicting a vibrant sunset over Pinnacle Mountain State Park in Little Rock.

“As an industry, we’re woefully underfunded. We’re getting outspent by most marketers,” Salyers explained. “The median state marketing budget is $7.1 million, enough for 45 seconds of advertising in the Super Bowl.”

Free listings on Arkansas.com for tourism-related businesses will remain. Those sections have been enhanced to allow photos and more detail, Salyers said.

“We built the entire website thinking about smaller tourism businesses, to benefit primarily those smaller businesses that need help,” Salyers said. “We also made available opportunities for businesses with larger budgets.”

EARLY BUZZ
The website isn’t live and one feature has already sold out. At the regional meetings, a half-price promotion was announced for video ads. For $5,000, 90-second video ads with musical backgrounds would be created by Waymack and Crew and displayed on the website. The customer would own the content, and extra features such as voice over could be purchased. 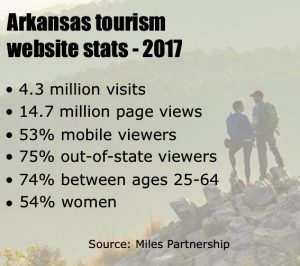 hey sold out early the following week. Apparently the state set aside $50,000 in seed money, allowing for 10 customers. Mark Raines, director of public relations for CJRW, said Monday that initial information about the ad plan had been emailed in early May to tourism partners.

Bill Ott, director of marketing and communications for the Crescent Hotel & Spa in Eureka Springs, had wanted in. Ott said he took materials from the June 29 meeting to his marketing team, which assembled an ad package for its two hotels, two spas and four restaurants. When he presented his request to CJRW at the end of the week, he was told the video opportunity was no longer available.

“We love partnering with the tourism department and we’re strong believers in what they’re doing, but they’re not letting us on all the rides in the playground,” Ott said. “It didn’t burst the bubble, but it certainly took the shine off it.”

The Crescent has advertised in the print publication for years and will take advantage of new rewards for those buy both print and digital ads, he said.

“We wouldn’t think of a marketing plan without including this, and we’re planning on jumping on it in a big way,” Ott said.

LARGE AND SMALL
Nestled in a valley behind the Boxley Baptist Church in Newton County, guests are welcomed at Walnut Grove Cabin year round, but business is particularly busy in the fall when bulls in the local elk herd are rutting, bugling and battling for mating rights.

From her home nearby, Regena Cochrane fields phone calls for Walnut Grove along with two other cabins she owns and two she manages. Her days are filled with laundry, scheduling cleaners and responding to inquiries. Cochrane, a cabin host since 1994, spends less than $1,000 per year on advertising: maintaining walnutgrovecabins.com and for handouts such as brochures, mugs, business cards and car decals. Her guests like to relate how they found her.

“People will say, ‘I picked up your brochure at the visitor’s center.’ But a lot of my business is more like, ‘Susie stayed, and she told me to come,’” said Cochrane, a retired Walmart department manager.

Cochrane has for years listed her cabins’ information free on Arkansas.com. Salyers said there are roughly 7,000 tourism-related businesses listed free on the site; they are arranged by type – places to stay and things to do, eat and see. Cochrane is also a member of a merchant group for the Upper Buffalo River region. Twenty-two members contribute $250 annually to jointly purchase radio, television and print ads. She’s eager to see the new Arkansas.com and learn how it may help her – and her group – generate leads.

“Every tourism business in the state will get a (free) listing,” Salyers said. “We structured it to function like a mini website with photos, rich media content and a link to their own website. This will enhance the display, features and functionality.” Higher rankings in the free listings can be purchased.

The print guide is also getting an update. With a larger 8.5 by 10” size, Salyers said photography will be more inspiring and additional ad sizes will be available (from a larger full page to a new 1/6 size for smaller budgets). Using direct mail, 150,000 copies will be sent to key out of state markets (such as Dallas and Shreveport) and 200,000 more copies will be distributed through 14 state Welcome Centers and in response to online and telephone inquiries from travelers and travel agents, editors, at travel shows, and so forth, he said.

An online version of that guide will again be available; during the first half of this year, that drew 13,000 online readers. Within that version, ads can be linked directly to a business’s homepage. The deadline for ads in the travel guide is Sept. 14.

The cost of launching the coop advertising program was not included the state’s budget for the new website, Gray said. CJRW will cover this and keep early revenue until its initial investment is settled.

“Then it becomes a revenue stream for the department, for use with website updates, maintenance or marketing efforts,” Gray said.

The new Arkansas.com should be live in the next few weeks.

“Once we launch the hard work starts: optimizing the site, monitoring how visitors use it, taking feedback and conducting surveys from consumers,” Salyers said.