The Walton Family Foundation began 30 years ago and has given $6.2 billion in grants to a wide variety of groups in Arkansas and around the country. Last year, 47 groups in Benton and Washington counties received $52.537 million from the foundation, more than the $41.5 million in 2016 and $29.8 million in 2015.

“Mom and Dad saw this foundation as a way to teach us how to give and work together. I believe the Ozarks have a special spirit, there is a special creativity here,” Alice Walton said in a video accompanying the foundation’s annual report released to the public Thursday (June 21). (See the video at the end of this story.)

Foundation Board Chair Carrie Walton Penner said a lot has changed over the past three decades, and as the family has grown so has the foundation. The Walton Family Foundation has given more $6.2 billion in grants over the past 30 years to 6,297 recipients. 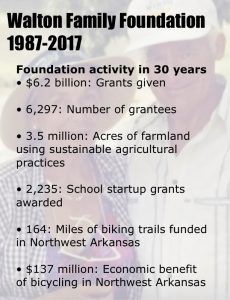 ems intensify daily, and we live in a time of increasing uncertainty and decreasing trust. Our desire to create access to opportunity for people and communities is now more important than ever.

“For the Walton Family Foundation, what remain the same are the timeless values that inspired my grandparents. They envisioned a world where people can accomplish anything with opportunity and encouragement. The challenges have grown along with our commitment to making this vision a reality,” Penner noted in the report.

NORTHWEST ARKANSAS HOME REGION
Last year the largest benefactor in the local region in grants was the Helen Walton Children’s Center in Bentonville, which is in the midst of a major expansion. The childcare organization received $11.349 million in grants.

With trails being a major focus of the foundation over the past several years, giving continues for organizations like Bentonville Bella Vista Trail Blazers Association who received $8.376 million last year from the foundation. Three other bike trail organizations received grants totaling $598,277.

The arts in the region also received significant support last year from the foundation with Theatresquared receiving $3.797 million in grants, and Crystal Bridges Museum of American Art receiving $1.351 million. Another nine art-related grants were made totaling $1.776 million, the largest was a $531,102 grant to the Arkansas Arts Academy.

GRANTS AROUND ARKANSAS
Outside of Northwest Arkansas the foundation also makes Home Region gifts in the Delta. Last year giving toward Delta projects totaled $6.82 million. Following are other gifts going to Arkansas organizations under the special projects umbrella.

Kyle Peterson, executive director for Walton Family Foundation, said after 30 years of philanthropy a favorite saying of Helen Walton still serves as a guiding principle for the organization: “It’s not what you gather in life, but what you scatter in life that tells the kind of life you have lived.”

He said the foundation remains committed to being a partner to those who have creative ideas that confront challenges regarding the environment, education or quality of life issues.

“We aim to remain steady in our approach to creating change and bold in our solutions learning from our successes and our failures,” Peterson said.