EDITOR’S NOTE: The following story appeared in the June 11 issue of the Northwest Arkansas Business Journal. “Then & Now” is a profile of a past member of the Business Journal’s  Forty Under 40 class.

Patti Kimbrough has returned to both her hometown of Fort Smith and to charitable work in the 12 years since she was recognized as a member of the Northwest Arkansas Journal’s Forty Under 40 class.

Kimbrough said she is fueled by a compassion for mankind in her position as executive director of the nondenominational faith-based Good Samaritan Clinic, a nonprofit which provides low-cost medical care to 5,000 people per year in the Fort Smith metro.

A Northside graduate and seventh-generation Arkansan, the tall Kimbrough dresses colorfully and is known for her effervescence and transparency. Growing up, she was influenced by her single mother who baked cookies, led the PTA and dragged her three daughters along to nursing homes, determined to lift spirits and relieve others’ burdens. The example stuck. Kimbrough organized her first fundraising 5K at age 19.

Late to bed and an early riser, Kimbrough is a visionary, a planner, an executor. She struggles to delegate, and she doesn’t sit still. Once someone asked her, “Patti, do your batteries come out?”

In 2001, Kimbrough went to work for the Alzheimer’s Association in Fort Smith, serving the region west of Little Rock from Mountain Home to Texarkana.

Through that job, in 2003, Kimbrough developed a relationship with then-University of Arkansas athletic director Frank Broyles, who was fiercely determined to save his wife Barbara from the grip of Alzheimer’s disease, she said.

Kimbrough supported the family and helped him create the book, “Coach Broyles’ Playbook for Alzheimer’s Caregivers.”

Broyles eventually hired her to be director of guest services for the University of Arkansas athletics department, a job she held for six years. With a staff of 90, she managed luxury suites and skyboxes at the UA’s athletics venues students, catering to high-end supporters.

Tensions could run high. After games, she’d reassure her staff with perspective: “Did anybody die? Did we kill anybody?”

During that time, Kimbrough served six years on the board of the Association of Luxury Suite Directors, which represents professionals in the NFL, NBA and NHL, as well as college athletics.

“It was out of my comfort zone, but I developed a tremendous sense of accomplishment,” she said.

Kimbrough saw Broyles up until the day before his death in 2017, and he left a deep imprint on her life and values.

When she married James Kimbrough (also a seventh-generation Arkansan) in 2005, Broyles hosted their reception with 200 guests, “in his amazing Fay Jones house,” she said.

After Broyles retired, Kimbrough longed to return to charitable work — and to her hometown, where she has ill relatives who need her support.

She joined Good Samaritan Clinic last year after working as director of special events for the Fayetteville Chamber of Commerce.

Her career path relies on relationships and integrity, and she values initiative, she said. “Don’t come to me with just a problem. Come with a solution, even if it’s not a perfect one.” 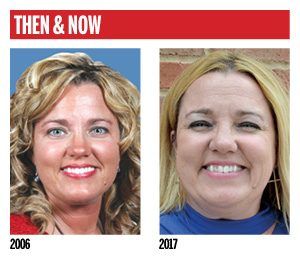 At the clinic, she witnesses little miracles every day, she said.

“[Our work] serves a gap in care and saves hospitals from indigent write off,” Kimbrough said. “We help people aspire to be above their station. I see pride in our patients. They want to pay. They just can’t always pay enough.”

Patients are allotted two walk-in visits before income guidelines kick in, and they are never charged more than $35.

In her first year, Kimbrough helped launch a Saturday clinic, so patients don’t have to miss work and lose income, by partnering with the Arkansas College of Osteopathic Medicine.

Kimbrough also serves on the nursing association board for the University of Arkansas at Fort Smith. Her husband is a nationally certified fundraiser, so they enjoy an interchange of expertise and experiences.

Kimbrough was a member of Leadership Fort Smith 2003, a graduate of Arkansas Leadership Class III and helped create NWA LeaderCon and the NWA Hispanic Heritage Festival.