EDITOR’S NOTE: The following story appeared in the April 30 issue of the Northwest Arkansas Business Journal. “Then & Now” is a profile of a past member of the Business Journal’s  Forty Under 40 class.

He’s only recently turned 40. But 17 years have passed since developer Hunter Haynes became the youngest member of the 2001 Forty Under 40 class.

Even then, at age 23, Haynes was managing more than 1 million square feet of office space in Northwest Arkansas, and securing financing for considerable high-end commercial development.

That enterprising younger version of Haynes, who often had a black lab named Maddie by his side, would fire off a litany of questions during his encounters with bankers, attorneys and real estate agents. The young Haynes knew he could overshadow his age by mastering the tasks at hand, so even if he came across as aggressive or irritating, he pursued expertise.

One law firm in Arkansas retaliated by issuing him an honorary law degree.

“That’s how I got to figure all this out,” Haynes said of his two decades in developing, leasing, selling and consulting for commercial properties, many of which have directly impacted the Interstate 49 corridor in Rogers.

Haynes is still intense and inquiring, but his focus is more on creating spaces that people respond to, are satisfied being in and also reflect his personal aesthetic.

Case in point — the 100-acre Magnolia Farms project in Rogers, 8 acres of which Haynes is currently developing. The project impacts the last vestiges of woods along South Promenade Boulevard, just north of the Home Depot. Haynes and the investor resolved to preserve the land’s slopes and natural elements, and emphasize water, trees and pathways.

This initial project is a five-story office complex built along an extension of Magnolia Street that will cross Interstate 49 and serve as a new east-west artery connecting South Promenade Boulevard with South 52nd Street. The 85,530-square-foot office building is flanked by a pond and natural habitats, reflecting the nature-intensive setting that Haynes favors.

“It’s so easy to get rid of trees, and it takes a lifetime to replace them,” said Haynes, who serves on a cluster of environmentally-focused boards and committees, including the Illinois River Watershed Partnership, the state’s National Audubon Society and the Northwest Arkansas Regional Open Space Plan. “I believe in the fundamental importance of, as Mount Kessler advocate Frank Sharp has said, keeping some green as 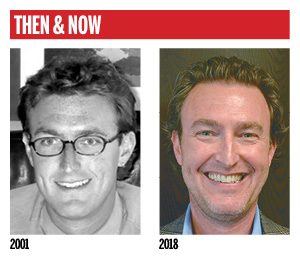 Haynes’ projects tend to be grander in size and scale than before, with extended leases of 10 years or more. His satisfactions come from “creating momentum, being able to sustain a project, having people be happy and proud to be part of what is going on,” he said.

At times he consults with his father, architect and developer Collins Haynes, on design features, always aiming for smart, efficient, clean spaces, “not in an asphalt ocean, but in natural settings. That’s what people want.”

Today, Haynes strives to judge himself fairly and indiscriminately, and to be his own worst and best critic. He said his accomplishments came from both luck and skill.

“I’m lucky enough to be part of a large enough current [in Northwest Arkansas],” he said. “What made this place so special in the beginning, and continues to make it special, is that it rewards the entrepreneurial spirit.

“When I began, there was no Embassy Suites. There was no Mercy Hospital. Developers saw pockets of interest, but no one saw the forest for the trees. I came to realize that we [in Northwest Arkansas] are going somewhere when I began to see the younger generation getting involved. The next 10 to 20 years here will be the most transformative. The best is yet to come — and I look forward to hopefully being a part of it.”

Haynes lives in Fayetteville and enjoys spending time with his children, Harlowe, age 3, and Henley, age 2. For travel, he seeks architecturally and historically rich environments that have amazing food. But he finds his terra firma being outdoors with “traditional redneck stuff. After the really transformative moments in my life, and when I need to be away, I go to the woods.”