Ross DeVol, formerly the chief researcher at the economic think tank Milken Institute in California who now does similar work for the Walton Family Foundation in Bentonville, has released a new report highlighting economic trends that are having a positive impact on areas of America’s heartland.

The research, “Micropolitan Success Stories from the Heartland,” outlines a blueprint of success in building strong economies in Middle America.

“There’s been a lot of consternation about how the heartland, the center of the country, is underperforming,” DeVol said. “Especially in smaller communities, and even up to small or even medium-sized metros. A lot of tech executives have said demeaning things about the heartland. I wanted to look at communities that are performing well in the heartland and try and understand what is driving that. Why are they performing better than others?”

Click here for a PDF of the full report.

DeVol said his research showed promising signs and a clear roadmap to bridge the economic and cultural disparities that divide the country.

At the heart of it, he said, is ingraining thought processes and habits of entrepreneurism.

“If you look at the data, you can clearly see a pattern of places that are more successful in the Heartland — smaller communities, micropolitan areas — are those where entrepreneurship is seen as important,” he said. “It’s part of their economic development plan. It’s not just about recruiting companies from elsewhere, but trying to provide support mechanisms to encourage people to start companies helping them to write business plans, to understand the procedures that are necessary.” 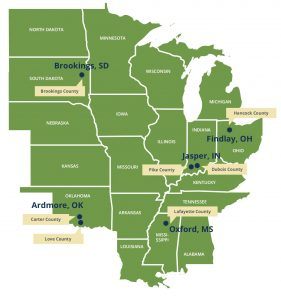 DeVol underscored the point with an example from his native Lancaster, Ohio, a thriving factory town decades ago largely because of Anchor Hocking Corp., a glassware manufacturer which at one time was the world’s largest manufacturer of glass tableware.

DeVol recalled most of his friends’ parents worked for the city’s largest employer, and most of them thought they, too, would work for the company one day.

Then changes happened. The company was bought out by Newell Corp. in 1987, several restructurings, layoffs and bankruptcies followed. A once-thriving option for employment is no longer that.

“The point being, when everybody kind of believes their best option or backup option is to go to work for the large employer in manufacturing, you’re not continuing to make people aware there are other options,” DeVol said. “Especially in entrepreneurship. You can see that in these communities that have what I might call anchor manufacturing facilities. That entrepreneurial awareness evaporates and people don’t see it as an option. You are at the whim of external forces, and that is clearly present in the data.”

RESEARCH POSSIBLY LEADING TO POLICY
DeVol’s research is part of a one-year tenure at the foundation, part of the Walton Fellows Program. His most in-depth and expansive research since joining the foundation last fall falls in line with his objective — to assess opportunities for regional innovation ecosystems that foster job creation, wage gains and economic growth for Middle America residents.

He will also work with universities and colleges, the business community and philanthropy to analyze resources that support the startup community and identify workforce and talent gaps.

Once his 12-month fellowship expires at the foundation, DeVol said he’s not planning to leave the area. He and his wife sold their house in California and bought a home in Bentonville.

“I think that probably says a lot,” he joked.

In fact, he says the type of research he and assistant Shelly Wisecarver just completed may lead to new organization being formed to focus specifically on this area of the country. And that’s not only conducting research, but also trying to apply it in terms of policy implementation assistance.

And, such an organization could be in Bentonville and it could be headed up by DeVol.

“It could very well be,” he said. “We’re not announcing anything yet, but I can sense that is what this is evolving towards.”

While at the Milken Institute, DeVol was responsible for overseeing research on international, national and comparative regional growth performance; access to capital and its role in economic growth and job creation; and health-related topics. He previously served as senior vice president of Wharton Econometrics, a predecessor firm of IHS Global Insight Inc., director of economic planning at CSX, economist at Chase Econometrics and economic analyst at Union Pacific.

He has been recognized among the “Superstars of Think Tank Scholars” by International Economy magazine.

Of his current home, DeVol characterized the region as “remarkable,” and said he has been encouraged by the success firms are having in recruiting what he refers to as “star talent” of their own.

“We knew each other going back to when he worked at Intel [Corp.],” DeVol. “To me, [Spradley’s hiring] sends such a strong message that the community is becoming tech-intensive, those skills are necessary, and it’s much easier to recruit.”

‘CONCEPT TO COMMERCIALIZATION’
An area DeVol has been working behind the scenes since moving to Northwest Arkansas is the economic development puzzle piece where he sees the most potential — the University of Arkansas.

In a broad context, there are some notable changes happening on the UA campus as it relates to the university’s role in the growing innovation/entrepreneurial ecosystem:

Adding DeVol to the mix creates an interesting connection. A study he authored while at the Milken Institute, “Concept to Commercialization,” examined which American research universities were best at technology transfer through licensing and startup activity.

DeVol believes now that the UA has been successful in expanding its student enrollment — up 48% in the past decade to 27,558 this past fall —the next step is having the university more highly recognized for its research, improving ways to support commercialization of academic entrepreneurship, then linking it to the private business sector in the region.

“I’ve been working with Stacy [Leeds] and others, and if you go back and look at ‘Concept to Commercialization’, it’s no coincidence I’m here,” DeVol said. “The time is right. You’ve got a relatively new Chancellor, he is a scientist with more of a commercial focus. There’s alignment, serendipity, I’ve done research on academic entrepreneurship and worked with universities around the country and done some consulting. So there’s an opportunity to share that perspective to see if we can’t do more to help the university help itself here.

“If we can get the university to achieve more prestige in the research area, change the culture and provide stronger incentives for faculty students and administration to be engaged in commercialization, you’re going to have a more interconnected ecosystem between the university and startup companies, major companies, and then you begin to get this feedback that grows on itself. To me, the university piece is the one where there’s the most upside.”