Dallas-based Topgolf has officially announced plans for its first location in Arkansas.

In a news release distributed Friday (May 18), the golf entertainment company said it will develop 11 acres just south of the Walmart AMP, west of Interstate 49 in the Pinnacle Hills area of Rogers.

No timetable for construction was given and the project still needs city approval.

“Northwest Arkansas has been on our roadmap for a few years,” said Topgolf chief development officer Chris Callaway. “The region is attractive to Topgolf for several reasons, including the strength of the local economy, continued population growth and strong corporate presence. Together with Hunt Ventures, we are excited and working to finalize our business plans.”

Topgolf will lease the land on South J.B. Hunt Drive from Rogers developer Hunt Ventures, the longtime developer headed up by philanthropist Johnelle Hunt. Topgolf was represented in the land deal by Colliers International in Rogers.

“Hunt Ventures is excited about the opportunity to welcome Topgolf to Pinnacle Hills in Rogers,” said Tom Allen, executive vice president of Sage Partners of Rogers, the commercial real estate firm representing Hunt Ventures. “Topgolf’s presence in Northwest Arkansas will be a great asset to this region not only for our residents, but for our businesses and our visitors. We believe this first-class entertainment venue will complement the Walmart AMP and the other amenities in Pinnacle Hills.”

Topgolf expects to create 300 full-and-part time jobs at the Rogers location, according to the release. Callaway anticipates the venue would serve approximately 250,000 guests each year, nearly half of whom describe themselves as “non-golfers,” he said.

According to its website, Topgolf inspires people of all ages and skill levels — even non-golfers — to come together for playful competition, through a premium experience of play, food and beverage and music.

“Getting a company with the reputation of Topgolf is another feather in our cap to showcase why Northwest Arkansas and Rogers is a tremendous place to live, work and play,” said Steve Cox, senior vice president of communications and marketing at the Rogers-Lowell Area Chamber of Commerce. “And this will be a particularly great fit because of the strong golf community we have in Northwest Arkansas.” 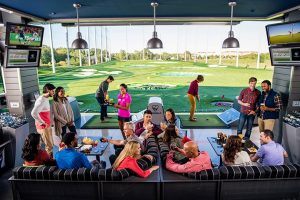 Topgolf, which launched in the U.S. in 2005, has 41 venues around the world and hosts more than 13 million customers each year. It’s planning new locations in places like Mexico, the United Arab Emirates and Australia.

PINNACLE HILLS POPULARITY
Pinnacle Hills is arguably one of the busiest areas in the state in terms of commercial development, most of it led by Hunt Ventures. The company has also filed development plans to bring two additional office buildings and a parking deck to the Pinnacle Hills area. A joint venture between Sage Partners and Hunt Ventures and Burnett Equity of Oklahoma is expected to begin development this year on a $100 million mixed-use project first reported last fall by the Northwest Arkansas Business Journal.

Restaurant chains Chick-fil-A and Tacos 4 Life have also recently opened new locations in the area, and Arvest Bank has filed its development plans for a new 24,000-square-foot banking center at the intersection of Pauline Whitaker Parkway and South J.B. Hunt Drive.

“Pinnacle Hills has been a hotbed for several years and weathered the recession well,” Cox said. “It’s a testament to the leadership of Hunt Ventures and Mrs. Hunt and Tom Allen and the Sage Partners team. It shows the commitment they have to improve that area and make it a benefit to our residents and visitors alike.”

Work also continues on new buildings in The District at Pinnacle Hills, a 54-acre commercial development along Pauline Whitaker Parkway that will eventually include a mixture of retail, office and restaurant space, as well as a boutique hotel. The long-term design also includes a multifamily component at the eastern edge, near the Razorback Regional Greenway. It will ultimately make The District at Pinnacle Hills a “work-live-play” community.

Construction began in earnest in 2016. It’s being built out by Whisinvest Realty of Little Rock.

Because of the heavy commercial activity, Pinnacle Hills is also attracting investment dollars to existing properties. A two- building commercial development and an undeveloped lot all near the front gate of Pinnacle Country Club recently sold for a combined $27 million.