One of Northwest Arkansas’ busiest areas for commercial development will significantly expand the scope of its activity early next year with the start of a $100 million mixed-use project.

A joint venture between Sage Partners and Hunt Ventures of Rogers and Burnett Equity of Oklahoma has told Talk Business & Politics-Northwest Arkansas Business Journal they have proposed the development on 15.69 acres in the Pinnacle Hills area of Rogers.

The site is at the northwest corner of the Pauline Whitaker Parkway roundabout, west of Interstate 49, and is known as the White Barn property, referencing a structure that once stood there.

The development is being billed as a “new urbanism” community, designed with an emphasis on walkability and public open spaces, according to the developers. The first phase consists of 296 multifamily units, 26,000 square feet of commercial space, an upscale hotel and several restaurants. Tom Allen, an executive vice president and principal with Sage Partners, said construction is expected to begin early next year. Sage Partners will handle the leasing for the development, with the exception of the residential property. That will be handled by Burnett Equity.

J.B. Hunt Transport co-founder and philanthropist Johnelle Hunt, chairman of Hunt Ventures, the landowner, told Talk Business & Politics-Northwest Arkansas Business Journal she’s been cautious in the past about how the property will be developed. But when the new urbanism plan was presented to her, she was immediately drawn to it. Hunt said developers have been working to put the project together for nearly a year.

“We’ve had offers [to buy the land] that have been really good, but when we’ve looked at them, we decided it wasn’t right for our land,” Hunt said. “When these people came to us from Oklahoma City with this project and we all looked at it, it was like, ‘This is it. This is the thing that fits.’ It’s going to benefit so many people.”

The developers have met initially with the city of Rogers and filed a Planned Unit Development (PUD) concept plan. A second public hearing on the concept is scheduled Sept. 6. In a letter sent Aug. 9 to the Rogers Planning Commission, John McCurdy, director of the city’s department of community development, gave his analysis of the project.

“This PUD … truly reflects a highest and best use of undeveloped land,” he wrote. “Its execution would contribute powerfully to this part of Rogers becoming the ‘downtown of Northwest Arkansas.’”

Hunt said the developers have also respected the project’s proximity to Pinnacle Country Club — the gated golf course community that’s one of the region’s most recognizable upscale addresses — and met with residents there to give them an early overview of their development plans.

“They all thought it was just what we needed,” Hunt said. “We’ve had some of the leading people in this area tell us this is what we need in Pinnacle Hills. We feel good about it from the response we’ve gotten from others.”

‘AUTHENTIC MAIN STREET’
Years from now, if the White Barn property is successfully developed into a thriving new urban community, Andy Burnett can chalk it up to a profitable trip to Las Vegas, and without wagering a dime at the craps table.

Burnett heads up Burnett Equity, a boutique real estate firm based in Oklahoma City. He is a veteran of the development game, with nearly a dozen projects in the downtown areas of Oklahoma City and Tulsa under his belt, including a pair that are similar to what’s being proposed in Rogers. 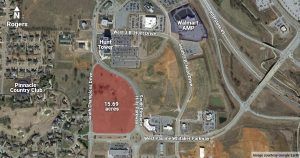 While attending an annual national retail conference in Las Vegas last year, a “friend of a friend” introduced Burnett to T.J. Lefler, an executive vice president and principal with Sage Partners. Lefler, as any business professional does these days, touted the strength of the Northwest Arkansas market. He particularly pushed the White Barn site for its development potential. And although Burnett was, admittedly, not receptive at first, a trip to Rogers a couple of months later opened his eyes.

“I came out and met Tom and T.J. and we toured the market and realized it had a lot more vitality than maybe what we had thought,” Burnett recalled. “And maybe it could support [a project] like this.

“We met with Mrs. Hunt, and she was about as charming as she could possibly be. And the deal just started slowly, organically coming together.”

He said the residential component — proposed to run along South Champions Drive in the concept plan — involves about 30 different design plans.

TREE PROTECTION
The PUD concept plan said existing trees on the property would likely be protected, and Allen said more than 400 trees will be added to the property during development.

“And these aren’t minimal size trees; we’re talking about large trees along the Pinnacle Hills Parkway and the site itself,” he said. “It’s going to add a lot of greenery.”

The PUD concept plan proposes four separate sections of public facilities including a square, a pedestrian plaza and green spaces. The plan also proposes to put South Pinnacle Hills Parkway — the eastern boundary of the PUD — on a “road diet,” a design to reduce the existing boulevard to an urban core street with on-street parking.

City engineers have asked for more data to support the road diet, but they do note traffic on that particular stretch of Pinnacle Hills Parkway does not warrant four lanes.