The HUB at Providence broke ground Friday (May 18) from 9101 R.A. Young Jr. Drive in the Chaffee Crossing district of Fort Smith.

The $11 million development at the Wells Lake Road intersection will feature a “live-above-retail” arrangement that includes 43 living spaces (23 townhomes between 1,593 and 2,634 square feet, 20 apartments between 530 and 701 square feet). Two buildings will feature 8,800 square feet of commercial space, 4,400 in each; and there will be a 2,500-square foot location for restaurant use.

Rod Coleman, chairman of site developer ERC Holdings of Fort Smith, said the company did not want to do “what has been done before all over this city.”

“We wanted to make a statement that living in Fort Smith, Arkansas, can be just as vibrant, modern and connected as in any other city in the United States.”

Coleman called the city a “fantastic place to live and flourish,” adding, “Our living and working environments should express that energy and reflect the changing culture around us at Chaffee Crossing.”

Coleman said The HUB is “a sneak-peek into our vision to create innovative living spaces that are in high demand because they reflect the how and where people want to live.” 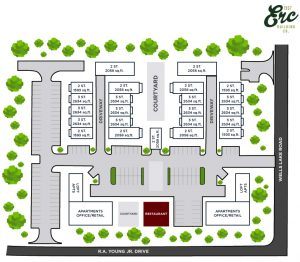 Nicole Swanson of ERC told Talk Business & Politics on Monday (May 21) that no tenants were in place for the commercial and restaurant spaces, but to expect those announcements closer to the end of 2018. The HUB’s official website has a simple “Coming Soon” message along with an email signup for updates and “pre-market pricing.”

Ivy Owen, executive director of the Fort Chaffee Redevelopment Authority (FCRA), said ERC “is the type of developer we look for.” Owen said developers like ERC are “creating a whole new way of life in Western Arkansas,” calling it one that “will be appreciated for generations to come.”

According to a press release, the design concept’s emphasis on connectivity will work in two ways: the technologies incorporated into building architecture and physical location. “Tenants and patrons will be able to cycle, run or walk on the Fort Smith Master Trail System from their front doors to other destinations in Chaffee Crossing and around the city,” the release stated, noting close proximity to golf, fishing, multi-use/mountain bike trails, nature and historical attractions, soccer, softball, Frisbee golf, tennis, and the Parrot Island water park as ancillary amenities.

The HUB will be located near property owned by the Fort Smith Public School district and will be part of the jurisdiction.