Easter is one of the most widely celebrated holidays around the world and this year it’s coming 16 days earlier, leaving retailers less time to promote holiday spending. That said, consumers are expected to dole out $18.2 billion on Easter fare this year, slightly less than the $18.4 billion in 2017, according to the National Retail Federation (NRF).

The trade group said 2018 spending should be the second-highest on record for the spring holiday, which is behind Mother’s Day and Christmas for average household spending. This year, consumers are expected to spend $150 per person, down slightly from $152 a year ago. NRF said 81% of U.S. consumers will celebrate the holiday, according to its annual survey done with the help of Prospect Insights.

“Despite a modest drop, the Easter forecast is still very positive and nearly as high as last year’s record,” said NRF President and CEO Matthew Shay. “Consumer spending remains healthy, both for this holiday and this spring, and that paints an optimistic picture for the U.S. economy in the year ahead.”

Food is the biggest spend on Easter ($5.7 billion) as 87% of consumers will have a dedicated Easter meal. More grocery retailers like Sam’s Club are trying to woo consumers with special holiday meal kits allowing families to spend time hunting eggs and visiting rather than in the kitchen. Sam’s Club spiral ham meal comes to $6.25 per person, not including dessert. The $75 meal will feed 12. Whole Foods offers a more expensive holiday ham meal for $119.99, intended to serve eight for an average $14.99 per person.

Consumers also like to buy new clothes for the Easter holiday and this year 48% of consumers are expected to spend $3.2 billion on spring apparel. Retailers like Target and Walmart have already set apparel departments in the stores with a wide variety of spring fashion, including swimwear. Weather patterns do have an impact on apparel sales. With winter weather still gripping parts of the country, projections are down slightly from the record $3.3 billion spent a year ago.

Candy is a big seller at Easter this year garnering around $2.6 billion in total sales as 89% of consumers will purchase sweet confections. Consumers buy almost as much candy at Easter as they do at Halloween, which had 2017 record spending of $2.7 billion.

Easter is also widely celebrated in the United Kingdom, and candy is the hottest item on shopping lists this year, according to IGD analyst Rachel Britton. She notes Easter sales in the UK this year are expected to top $1.25 billion. Britton said retailers like Walmart-owned Asda and competitor Tesco have been widely merchandising Easter items for several weeks in their stores. She said Asda is featuring a “cheesier egg” which is seen as a healthier option to sugary candy. She said retailers in the U.K. are also following consumer trends and offering more fruits and vegetables instead of chocolate or marshmallow candy. 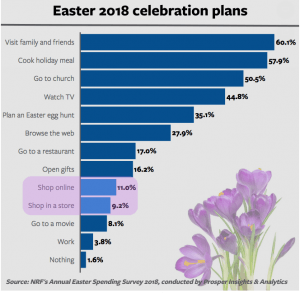 Fresh flowers and home decor are also categories that draw in substantial sales for Easter. This year about one in four consumers said they will buy fresh flowers for a total spend of $1.3 billion, up slightly from $1.2 billion a year ago. Roughly 46% will buy home decor to reflect the holiday for a combined $1.1 billion, even with a year ago.

Greeting cards, despite the proliferation of digital media, still generate around $780 million at Easter. Nearly one in two consumers will purchase an Easter card this holiday. A few years ago retailers looked at possibly eliminating the greeting card department.

“If we had looked at what the statistics were showing five years ago on greeting card sales, we could have likely scrapped that category. But we still sell a lot of cards and this is a high margin business which is important to the overall box,” said David Scogin, vice president of store layout at Walmart.

NRF reports one in six consumers will shop at discount stores for their Easter goods this year. About 46% will shop department stores and 28% plan to make purchases online.

“With more than three-quarters of consumers saying they will celebrate Easter this year, the holiday continues to be a traditional staple for Americans,” Prosper Insights Executive Vice President of Strategy Phil Rist said. “We continue to see consumers across ages, genders, regions and disposable incomes participate in this holiday.”

The Prosper Insight survey found 60% of respondents plan to spend Easter with family and friends, and 58% will cook a meal for the holiday. Slightly more than half will attend church services on the religious holiday, and 17% plan to lunch out afterwards. About 35% of families surveyed will participate in an Easter egg hunt and 16% will exchange and open gifts.