Arkansas and other southern states are seeing a huge influx of new residents into the labor pool as the nation’s population base is starting to look much like the final college football rankings with a strong SEC focus.

Between July 1, 2016 and July 1, 2017, U.S. Census estimates show the South added 1,235,167 additional residents, well above the second-fastest growth region in the West with a population increase of 765,672 people. The Midwest and Northeast regions saw meager gains of only 201,183 and 111,221 residents, respectively, according to year-end population estimates compiled by the U.S. Census Bureau.

What stands out in the Natural State – which census data estimated touched 3 million people for the first time in state history at the end of 2017 – is the huge spike in the number of people from the other 49 states moving to Arkansas and pushing the employment levels to an all-time high.

That impressive gain did not go unnoticed by Gov. Asa Hutchinson, who constantly promotes Arkansas as a natural landing spot for startups and tech-oriented millennials, highly-skilled professional and military retirees, highlighted by passage of a new law during the 2017 session to exempt all military retirement pay from state income tax.

“This is just extraordinary, exciting news and is reaffirming the direction that we are going as a state,” Hutchinson said in an interview with Talk Business & Politics. “One of my objectives is: I want to grow our state both in terms of our labor force and economic growth. And a good indication is in-migration, particularly of those from other states that say, ‘we want to move to Arkansas.’” 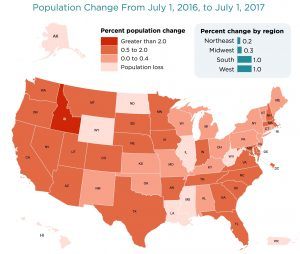 During his three-year tenure as governor, Hutchinson has focused much of his agenda on growing the economy by recruiting foreign and out-of-state companies, and supporting legislative initiatives that prepare workers for technical and professional jobs that pay higher wages. The Republican governor said Arkansas has a lot to offer out-of-staters, which he believes will continue to push net migration totals even higher in the future.

“I think (we) saw the kind of growth in 2017 that reflects that the word is getting out about our lower taxes for military retirees (and) job creation that has gone on in this past year, so I delight with those net migration numbers and hope that we can keep up that trend,” said Hutchinson, who is running for re-election in 2018.

TALKING NEIGHBORS
Like Hutchinson, Pamela Willrodt, demographer for the U.S. Census State Data Center at the Arkansas Economic Development Institute (AEDI) in Little Rock, said recent census, employment and economic data show that many factors may affect the year-end net migration estimates. She said so-called “soft” statistics that do not show up in economic data prominently like quality of life, cost of living, and affordable housing could be factors driving the trend.

Willrodt, who moved to Arkansas from California in August, noted she is one of the “net migrators” who moved to take the research position at the University of Arkansas at Little Rock because she wanted a better quality of life as she nears retirement age.

“I’ve lived a lot of places, and (Arkansas) is different. It is a (great) place to be,” Willrodt said jokingly before adding, “I have neighbors who talk to each other.”

Willrodt and other state census watchers, economic forecasters and workforce officials all highlighted one key trend in all the major data – growth in Northwest Arkansas is continuing unabated as the state’s population count and economy continue to expand.

“More than half of that net in-migration has been in Benton and Washington counties, while some other areas of the state have lost a lot of people,” said Mervin Jebaraj, director of the Center for Business and Economic Research (CBER) at the Sam M. Walton College of Business at the University of Arkansas.

In addition to the nearly 9,000 news residents now calling Arkansas home, another 7,841 of the state’s 16,048 new residents were added to the population total by “natural increase” in 2017, census data shows. The Census Bureau’s “vital events’ population change show new births in Arkansas at 38,236 surpassed the death total of 30,395.

Still, Willrodt said it will be some time before it becomes clear if the net migration spike over the past 12 months is a one-time anomaly or a trend Arkansas will continue as part of the state’s efforts to attract millennials, retirees and blue collar and high-skilled workers. And the first look may come in March when the Census Bureau is expected to release revisions to its annual estimates.

“We don’t know if we have a trend, but things are looking like Arkansas may be turning,” said the UALR demographer.

RISING SOUTHERN POPULATION
Nationwide, the year-end U.S. Census Bureau estimates show 326,971,407 people living in the country as the nation enters 2018. This represents an increase of 2,314,238, or 0.71% from a year ago, meaning the U.S. this year is expected to experience one birth every eight seconds and one death every 10 seconds.

And Although Idaho was the nation’s fastest-growing state by percentage, states in the South saw the strongest “numeric” growth with Texas and five other southern states (Florida, North Carolina, Georgia, Tennessee and South Carolina) ranked in the top ten states with highest total of new residents.

Altogether, the booming southern growth trend added 16,048 residents to the state’s brimming population base that now has nearly 1.4 million employed workers, census and workforce data estimates. Among the state’s 3,004,294 residents, the median age has increased each year of the 2010-2016 period to the current 38 years, just above the national average of 37.9 years of age, according to data compiled last summer by the UALR data center.

Other key trends from AEDI, where Willrodt will now serve as the center’s research demographer, shows that 65% of the state’s 75 counties experienced an increase in median age over the last year. In 2016, three counties had populations that were mostly Baby boomers over the age of 50. Baxter and Marion each had residents with a median age of 52.1 years, while the average age of residents in Montgomery County in western Arkansas was 50.2 years.

The Native American and Pacific Islander population groups grew at an annual rate of 2.2% and 3.2%, respectively, and now make up nearly 40,000 of Arkansas’ total population. Those identified as being two or more races grew by 3.1% to 60,645 in 2016, census data shows.