Use of the tech-enabled guest rental service Airbnb continued to increase this past year in Arkansas, according to the company, which said it logged about 78,400 guest arrivals and brought in $8.5 million for its hosts in the area.

There are now more than 1,600 Airbnb hosts across the state, according to the company, and the typical host, on average, earned $4,600 in 2017. That number is also up from the previous year, when the typical host earned $3,800.

Jim and Rose Horner have used Airbnb since September 2015 to rent out a cabin they own in Valley Springs, near Harrison. Called Murray’s Cabin in the Ozarks on the website, the Horner’s property was listed as the most popular in the state by Real Simple magazine. The national publication said it based the ranking on data from Airbnb that showed how many people included the property on their wish lists.

The Horners advertise a secluded and tranquil cabin on 20 acres, overlooking “green meadows with a mountain backdrop.” The cabin accommodates six guests, and rates begin at $109 for a minimum of two nights. With the Buffalo River and other outdoor elements serving as the main draw for Murray’s Cabin, Jim Horner said the winter months are often the slow season for his property rental, but overall the cabin has been booked 60% of the year since it opened. During that time, he said there has been a noticeable increase in rental properties in his area.

“Competition is a little heavier now, but quite frankly I’m blessed in the fact if the properties are rented out, mine’s about the first to get booked,” he said. “We count on top-rate reviews, and we keep the price competitive.”

The average Airbnb guest stayed 2.7 nights in Arkansas this past year, and the average group size was 2.8 people, according to Airbnb. Forty percent of surveyed Airbnb guests in the state said they spent money in the neighborhood where they stayed. 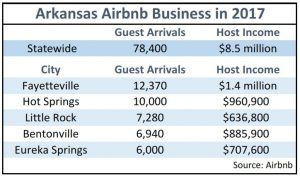 In all, the couple have invested $100,000 in the property, with more than half of the cost in the renovation, including brand new kitchen cabinets, appliances and bathrooms, said Horner, recently retired as the owner of the retail store Horner’s Furniture in Harrison.

“We gutted the place and restored what we could. Everything’s brand new,” he said. It was a priority that all elements of the property be “first-class.”

“We wanted it to be the nicest property in our neighborhood, and that’s paid off,” Horner said. In the beginning, he believed a return on his investment would take “years and years.”

However, the couple recently made the money back through rental fees. Horner said the couple joined Airbnb “just as vacation rentals were getting a good foothold.” Within two weeks of putting the property on the site, it was booked solid for three months.

POTENTIAL CHALLENGES
While Horner, appears undaunted by the prospect of increased competition, he is concerned about potential legal crackdowns against Airbnb. He pointed to new legislation in San Francisco that requires Airbnb listings to register with the city. It resulted in the pulling of more than 4,500 of Airbnb’s 11,000 rental listings earlier this year, when hosts failed to meet the registration deadline, according to a report in the technology magazine CNET.

Horner said there are also rumblings in Springfield, Mo., where a relative has multiple Airbnb listings, of a legal limit on short-term rentals in the city.

The hotel industry also has called for tighter regulations for Airbnb properties – that they be held to the same safety standards and codes, for example – and that they pay the same taxes. Airbnb this past year collected and remitted to the state the 6.5% Arkansas gross receipts tax, the 2% state tourism tax and local sales and use taxes from its hosts. Also in 2017 the company agreed to collect and remit local hospitality taxes in Bentonville, Eureka Springs and Hot Springs. It has agreed to start collecting in Fayetteville on Feb. 1.

While hosts and area governments appear to be increasingly embracing Airbnb, so have Arkansans. The company counted 124,700 outbound guest arrivals from Arkansas this past year. Airbnb, founded in 2008, is now in 65,000 cities and 191 countries, according to the company.