Tyson Foods unveiled its new downtown Springdale office on Tuesday (Nov.14), and company leadership said the facility will usher in a new era for the business, support continued development downtown and serve as a springboard for the establishment of Northwest Arkansas as a tech hub.

The location of Tyson Emma, 319 E. Emma Ave., was home to the Springdale-based company’s first headquarters in the early 1940s and also the former electric hatchery. In building the new, 56,101-square-foot office, Tyson Foods preserved the brick facades of the two buildings. Reclaimed wood from the original properties was used on the interior of the office.

John Tyson, chairman of the company started by his grandfather, also John Tyson, said the return to Emma Avenue brought back memories of when Tyson Foods headquarters left downtown in the late 1970s. His father, Don Tyson, chairman of the company at the time, was aware of the possible impact, but made what he believed was the best decision, based on what was going on at the time, Tyson said.

“I think today my grandfather and my father would be happy that we’ve reconnected [to downtown]. Really, we’ve never left. We’ve always had activities, but I think with what we see here today, they would appreciate that we’ve come full circle,” Tyson said.

The establishment of the new office is part of Tyson Foods’ and the Tyson family’s efforts to help support revitalization in downtown Springdale. The company’s commitment to the effort also is enforced by a $1 million gift to the nonprofit Downtown Springdale Alliance in 2014.

“When we thought about how we could support Springdale, there were requests for funding to remodel this and remodel that. In the end, until we put a set of individuals working, living and spending economic activity onto Emma, there was not going to be the kind of excitement,” Tyson said.

CEO Tom Hayes said Tyson Foods’ investment around Emma Avenue and the center of town has been strategic, with a focus on building up tech entrepreneurship in the area.

“It is on purpose that this is tech center. This is not going to be where this stops. It’s the start,” Hayes said. It is part of a “birthing process.”

In addition to its implications for downtown Springdale and the regional tech industry, Hayes said the building marks the start of a “new generation of Tyson Foods, in the way we operate, the way we work.” Chief Technology Officer Scott Spradley echoed Hayes’ sentiment.

“This is a new beginning for us. Our vision is to make this the new tech town. We look at this as the Tyson tech town,” Spradley said.

The facility will be home to 250 information technology employees at first, but Spradley said there are plans to add many more in upcoming years. Tyson employs more than 6,000 people in Springdale and more than 23,000 people in Arkansas, according to the company.

“We can see the birthplace of a whole new epicenter of technology,” Spradley said. “As I talk with my friends at Wal-Mart, J.B. Hunt, Rockfish and other technology companies, I really have a vision of getting them to look at this as a technical center as well.”

Spradley said he has also talked to deans at the University of Arkansas in Fayetteville “about proliferation of technology we want to have in this area.”

“Coming from Silicon Valley, I have a lot of roots in the venture capital world, and so I think there are just as many fine technologists in this area and can be in this area. We really want to drive entrepreneurship here,” he said.

TYSON EMMA ERA
Tyson Emma has convertible sitting-standing desks and will have a garden with fire pit and areas for bocce ball, shuffleboard and baggo. With nearby access to the Razorback Regional Greenway multi-use trail, Tyson Emma also will feature ample bike parking and showers. 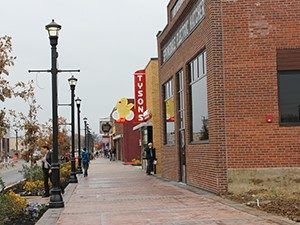 “What you won’t see in this building are any offices for any people to sit in. What you will see is collaboration rooms for all of us to sit in,” Spradley added. “It’s my dream that we move to a more collaborative nature and really embrace what’s going on the world today, which is less hierarchical.

“I like to say we have lot of brains that are connected together. Titles are out the window. It’s all about human beings that are very smart working together to create implementable strategies and solutions,” said Spradley, who made the building design requests to leadership, which he said were delivered.

“Our new cultural normal starts with this,” he said, adding the facility will “come alive” when people are there. “You will feel the energy.”

He spoke about how impressed he was by the facility. “I’ve been all over the world and seen a lot of technology buildings, and I can tell you I have never seen one finer than this building,” Spradley said, “My new home.”

The architect on the project was HOK Group of St. Louis, and Milestone Construction of Springdale was the general contractor. Company spokesman Derek Burleson said investment in the new facility was in the tens of millions of dollars.

CATALYST TO REVITILIZATION
Springdale Mayor Doug Sprouse thanked Tyson Foods on behalf of the city for its work downtown.

“It’s not just about downtown. It’s about our community, those who grew up here and those who have come here from all over the world to be able to come enjoy a city with their family and plant their lives here and raise their families. This is a tremendous piece in making that continue to happen.”

A 2015 study from the Walton Family Foundation shows the portion of paved trail that crosses Emma Avenue funnels close to 800 people per day into downtown Springdale. It’s mostly cyclists and primarily on the weekends, though the study shows 100 weekday pedestrians and 80 on the weekend.

“The investment Tyson has made in downtown is enormous, both in terms of the brick-and-mortar assets as well as by bringing hundreds of people to the area,” said Downtown Springdale Alliance Executive Director Kelly Hale Syer. “This project celebrates and honors the history of the company and the city of Springdale while simultaneously helping to drive the kind of economic growth that will ensure a bright future for downtown.

“I anticipate we will experience a wave of additional investment in the area in terms of restaurants and retail, as well as housing. Tyson’s project is serving as a true catalyst for others to look at downtown and see a whole array of possibilities, and this is invigorating on so many levels,” Syer said.

Previous post
Sen. Boozman calls for Moore to withdraw from U.S. Senate race in Alabama
Next post
Arkansas' population among the heaviest in the country