PRADCO closed out the day with the announcement of the added jobs, which follow a 25-job pickup in early 2016 and 64 jobs added to its YUM fishing lure production line since January 2017. After the latest batch of jobs are added, the Fort Smith plant will be home to around 290 employees. PRADCO is a private company that does not share dollar amounts, but Bruce Stanton, the company’s vice president of human resources and general manager, said the jobs would be anywhere from entry-level “$9-$10 an hour” to higher paying management positions.

Driven by rising demand, PRADCO will add four soft plastics machines to produce YUM baits at the Fort Smith facility. YUM’s manufacturing line is a three-shift operation that runs 24 hours a day, five days a week and Saturdays if necessary. Additionally, PRADCO will move the Thill Floats production line from Minnesota to Fort Smith in the coming weeks.

“Business is booming right now – particularly at Walmart – and we are very blessed to be able to scale up our U.S. manufacturing operation,” Stanton said, adding that Walmart U.S. is the company’s biggest customer, carrying 867 PRADCO products in 4,000 of its U.S.-based stores. Stanton could not give Talk Business & Politics an exact dollar amount.

“This job expansion is a direct result of Walmart’s $250 billion commitment to American jobs and local manufacturing. Additionally, EBSCO, our parent company, has supported us with strong, seven-figure investment in our YUM manufacturing capabilities, and they continue to show long-term support to jobs in Arkansas,” he said.

While Stanton said it has long been a PRADCO tradition to manufacture products in the U.S. since opening its doors in 1960, he told Talk Business & Politics that if Walmart “would have wanted pricing that was a little more favorable, we would have had to move it off-shore. But they were excited to be able to buy products made in the U.S., they were happy with the price they were given, and that we could service them out of here.”

Stanton continued: “We wanted to move it here, but we really had to get buy-in from our biggest customer.”

As to the cost differential between manufacturing in the U.S. compared to overseas, Stanton said, “I wouldn’t say it was significant, but it was enough that if it was laying on the ground, you’d pick it up. There was a difference. But Walmart said they wanted to make it here, and it fits their initiative. And you know all the different buyers, no matter what the category, they’re all charged with buying U.S.-made products. So with us being the largest fishing lure manufacturer in the United States, it just made sense for them to talk to us about this.”

Separate from YUM lines, Thill has the number one market share position in the U.S. in fishing floats, according to Southwick & Associates’ 2016 Annual Angler Survey. Thill has a complete line of balsa floats, which will be manufactured entirely in Fort Smith starting in December.

In comments at the event, Gov. Hutchinson said it was “gratifying” to see Arkansas companies working together as partners.

“Walmart’s initiative to support quality products made in America has had a tremendous impact on the bottom line for many Arkansas businesses and their communities, including PRADCO and Fort Smith. It’s a boon to the entire state when we provide the atmosphere businesses need to grow and prosper, and we are proud to celebrate PRADCO’s successes,” Hutchinson said.

Fort Smith Regional Chamber of Commerce President and CEO Tim Allen said its a good sign when such established companies are expanding.

“Pradco is one of the most respected companies in Fort Smith,” Allen said. “To watch their growth since 1960 and know that they are part of the exciting economic momentum of the area is very satisfying. They are a perfect example of how Fort Smith leads the way.”

PRADCO recently acquired Rogers-based War Eagle Custom Lures and will operate the business from its fishing division in Fort Smith. Terms of the deal were not disclosed. War Eagle was founded by Keith Brashers in his garage 21 years ago, with his spinnerbait brand now the No. 3 U.S. brand according to the 2016 Annual Anglers Trends Report by Southwick & Associates.

METHODIST VILLAGE EXPANSION
The first phase of the Methodist Village expansion is estimated to cost $15 million, and it will consist of a 26-bed assisted living center and a 19-bed Alzheimer’s special care unit. The campus redevelopment will become a complete continuum of care “Life Plan Community,” including a new 145-bed care center and 80 independent living residences. 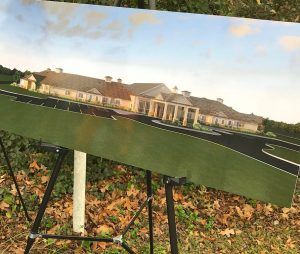 The entire project will represent a $50-$60 million community investment, serving more than 270 residents and others in the region through outreach efforts, creating new jobs, and increasing the site’s existing employment base of 160 to over 200 by the time it reaches completion. The purpose of life plan communities is to allow residents to stay at local facilities around family and friends while receiving more nuanced care.

Methodist Village’s expansion of services will result in the full-time equivalent of 27 new jobs and an additional $1 million in payroll (combined salary and benefits) to the Fort Smith region, an average of about $37,000 per employee. That is a projection that looks out to 2020, which will be the facility’s first year of stabilization. It does not count the construction jobs that will be created during buildout stages.

Construction of Methodist Nursing Home began in 1960 with the first resident arriving on March 19, 1961. In 1975, “The Village” – independent living retirement apartments – were added to the 27-acre site at Euper Lane. About 80% of residents are female and more than 50% are considered “low income” by federal guidelines.

Starting in 1974, the site began a 40-year mortgage with the Department of Housing and Urban Development (HUD). The agreement concluded in 2014, enabling Methodist Village to push through with the Life Plan Community concept. Fundraising efforts are ongoing, but it has received a $1 million challenge gift from the Windgate Charitable Foundation and the Miller Family Foundation contingent on $2 million of independent fundraising.