EDITOR’S NOTE: The following story appeared in the Oct. 16 issue of the Northwest Arkansas Business Journal. “Then & Now” is a profile of a past member of the Business Journal’s  Forty Under 40 class.

As assistant dean of the University of Arkansas Sam M. Walton College of Business, Karen Boston appreciates the varied experiences she gets to have.

“No two days are the same,” Boston said. “And no one day is necessarily what is on my calendar. It’s always shifting and moving. There is no monotony. I might be in China one day and in Harrison, Arkansas, the next, or I’m here working with online programs or in the career center.

Because of her involvement in the global engagement division of the Walton College, Boston has been to China twice in the past two years, as the school has expanded its work there.

Through her contribution to multiple divisions at the college, there are programs in which she plays day-to-day roles and those where she jumpstarts or creates initiatives and then lets others come in to carry it forward.

“It’s really involved right now. There are a lot of things we’re working on,” Boston added. “I have a lot of balls in the air.”

During the 10 years since Boston was featured in the Northwest Arkansas Business Journal’s Forty Under 40, Walton College has grown considerably.

In fact, enrollment has doubled in the past six years, Boston said.

Outside of work, she is involved in multiple organizations in the community.

Highlights include her former role on the board of the Fayetteville Chamber of Commerce, including her tenure as chair from 2011 to 2012. Boston said this was especially notable because she was the youngest to serve in the position in the chamber’s history, and she was the fourth woman to serve in the role since 1885.

She also served in 2009 and 2010 as volunteer coordinator for the multi-day event Bikes Blues & BBQ. “It was a huge undertaking, but also very fulfilling,” she said, noting the contribution the event provides, “both economically and giving back to our nonprofits.” 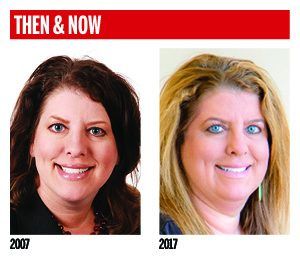 Boston has been involved with the Junior League of Northwest Arkansas as a sustainer and with the Alzheimer’s Association of Arkansas, playing two years in the Blondes vs. Brunettes football game fundraiser. She’s served on the committee for the event for three years.

One reason she is involved in volunteering is to encourage her son, Winston, age 15, to be a good citizen. “I do want him to see the value of being philanthropic or giving back in the community,” she said.

Boston would also like to encourage Winston to “do what he loves.”

That’s true about her career.

“One thing that drives me is I think it’s really important to be in a job you like a lot,” she said. “One that you’re happy to go to in the morning and that isn’t a grind. I really enjoy the work I do. Being in the field of higher education is very rewarding to me. I don’t work as much with students directly, but I know the work I’m doing supports the students.”

When she does interact with young people, she encourages them to go to graduate school or further. The other is that, straight out of college, they will not “get a six-figure salary right out of the door and get to do whatever they want.”

Boston graduated from the UA with a bachelor’s in criminal justice. She earned her master’s in education in 1996 and her doctorate in 2002.

“You’re not going to get my job right off the bat. I’ve worked at the business school 20 years. I encourage them to get lots of experience and develop themselves professionally,” Boston said.

One of her focuses is the support and mentorship of younger women, especially those in the business field.

She has shared her story in several ways, including participating in 2013 in the public speaking event, Listen to Your Mother, where she told a story about her son.

In her spare time, Boston likes going to concerts with friends, at least four or five per year. Most recently, she saw KISS at the Walmart AMP in Rogers. Before that in September, she saw John Mayer in Chicago. Other highlights include Justin Timberlake, Journey, Maroon 5, Foreigner and Madonna.

One constant in her life has been a “really good network of strong girlfriends” and another is her Monday through Friday, 5:30 a.m. workout. She said it “helps me keep my sanity, think clearly and get a good start for the day.”