Total spending is projected to top $9.1 billion, or an average of $86.13 per person, up compared with $8.4 billion cumulatively, or $82.93 per person in 2016, according to the annual survey by the National Retail Federation and Prosper Insights & Analytics.

“Americans are planning to spend more than ever as they gear up for Halloween,” NRF President and CEO Matthew Shay said. “Retailers are helping customers celebrate in style with a huge selection of costumes, candy and decorations to cater to ghosts and goblins of all ages.”

Improved consumer confidence in the overall economy is one of the main reasons retailers are hopeful they will cash in on Halloween sales. The top costume for children is reported to be an action hero, while the top costume for adults is a witch. Pets also get into the action with 37% of respondents dressing their pet in a costume, the most popular being a pumpkin.

Consumers are expected to spend $3.4 billion on costumes which are purchased by 69% of those celebrating this holiday. More than one-third (35%) said they found their costume online, 30% have looked only in stores, 20% are seeking advice from family and friends, and another 18% said they turn to social media for inspiration on their costume selection. 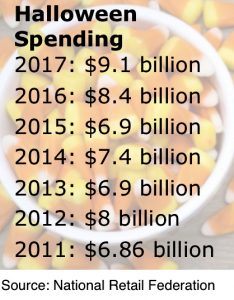 The bulk of the holiday spend is earmarked for costumes, but next in line for wallet share is the $2.7 billion doled out on candy. The survey found 95% of those celebrating this holiday will purchase Halloween candy. One in three households will take children trick or treating this year.

A majority (72%) of households celebrating the holiday will spend a cumulative $2.7 billion on Halloween decorations and 46% said they plan to carve a pumpkin, 35% will throw or attend a party and 23% will visit a haunted house.

“Halloween continues to be a highly anticipated holiday for Americans, who will spend a record amount this year with increases across all purchasing categories,” said, Pam Goodfellow, analyst with Prosper Insights. “Expect consumers to be on the lookout for early-bird promotions both online and in-store as they hunt for the best items to complete their costumes and embellish their homes.”

She said just because the aggregate spend is expected to rise that doesn’t mean consumers aren’t looking for promotional pricing which has become a staple in retail today. Goodfellow reports nearly half of respondents said they will shop in discount stores this year, 38% will go to a specialty Halloween store, one in four will get purchase items at supermarkets or department stores and 22% will shop online.

While greeting cards don’t make the top spending categories for this holiday still 37% of respondent said they will purchase Halloween greeting cards for an overall spend of $410 million, up 5,12% over the $390 million spent last year.