One of the iconic ladies of Garrison Avenue in downtown Fort Smith is getting some work done – inside and out.

The eight-story headquarters of First National Bank of Fort Smith, a building first completed in late 1909, is undergoing renovations on the first and second floors, said Sam T. Sicard, president and CEO of the bank holding company that owns First National. The inside work is pegged to cost “just under $2 million,” Sicard said.

A challenging part of the work is the large first floor, with its high ceilings, extensive use of marble and large window treatments. The floor was built to handle the traffic when the building was the only place to conduct bank business – long before the first branch bank or an Internet.

“It’s going to be a pretty big change on the first (floor). We want to modernize that area, but we also want to preserve the history that’s there,” Sicard told Talk Business & Politics, adding that the bank was able to secure historic tax credits for the work.

“So that (historic preservation) is a guide on some things we can and can’t do there,” he said.

When the work is completed in late November or early December, there will be fewer teller stations on the first floor, with the goal to “repurpose” the marble and other historic pieces to create a modern lobby, Sicard said.

Just as bank officials were careful to maintain historic elements inside the bank, Sicard said he was “cautious” on preserving the bank’s more than 100-year history when considering if and where to place a mural on the outside of the all white structure. The bank was a sponsor again of the third year of The Unexpected Project, which brought international and local artists to downtown Fort Smith to create murals, sculptures and other forms of art.

“We had to be cautious about preserving the history of this building, so in putting up a mural, I was very sensitive to that. So I wanted to make sure it was in the right location, and didn’t take away from the storefront appearance,” he explained.

Sicard gave credit for the mural design and installation to University of Arkansas at Fort Smith professor Bryan Alexis and his students. Sicard said he “made some tweaks,” but was “really impressed” with their final product. That final product, Sicard said, has a not so subtle “go beyond” message; a note to individuals and the community that each day they should work to go beyond what is expected.

“Professor Alexis came up with this concept of the different thoughts and emotions that comes from our minds … and he also wanted to tie in with the message of ‘go beyond,’” Sicard said. “I wanted it to be very aspirational. Both at a micro and a macro level, at a collective level and at an individual level.” 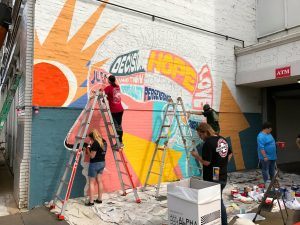 In a social media post, Sicard noted: “What is the connection between this mural and a historic bank building? Well, for over a century customers have come to this building to embark on ambitious journeys to change their present conditions and the conditions of our community. They have come here seeking assistance and guidance to embark on entrepreneurial endeavors to better their lives and the community. The beginnings of these journeys always start in the human mind!

“What is the connection between this mural and our community? Fort Smith has a unique and rich history of being on the edge of the frontier, and this mural takes this idea and makes it personal. Each one of us has a “personal frontier”, maybe something we want to do that we’ve never done before, or a place to go we have never been. This journey begins with a thought or an idea, and can only be accomplished with the direction, guidance, and support of those who are personally connected to our lives. I hope this mural inspires us to utilize the unique abilities of our mind to ‘Go Beyond!!!!’ our present state. We must use the remarkable minds we have been given to advance and better both our lives and the lives of others.”

The mural is expected to be complete by Sunday (Oct. 1).