First National Bank of Fort Smith announced a $100,000 donation in support of a combination bike and skate park in downtown Fort Smith on Friday (Oct. 13). The park will be located at 121 Riverfront Drive on the property that would have initially contained the planned United States Marshals Museum.

The museum site recently relocated to a nearby plot of land still along the riverfront to accommodate a smaller facility that will help it hit its targeted Sept. 24, 2019 opening.

On the new park and donation announcement, FNB President and CEO Sam Sicard told Talk Business & Politics the $100,000 will push private fundraising goals for the public-private partnership beyond $300,000, which is past the halfway point. The private sector has other unannounced cash donations and commitments at this point, Sicard said, but there is still ground to cover to hit the $600,000 goal. Funds will be donated through 501(c)(3) organization Park Partners of Fort Smith. Other donors include Steve Clark of Propak Logistics and Bill Hanna of Hanna Oil and Gas.

Sicard said private donors will pay for the park itself while the city will purchase the land and handle needed infrastructure such as parking lot and restrooms out of its capital improvement budget funded by the existing 1/8-cent sales tax. The city will receive funds from Park Partners and then send out requests for proposal.

Westphal Properties had initially donated the land to the museum, which is expected to sell to the city of Fort Smith for around $200,000. Sicard said the deal hasn’t closed yet, but with it, he expects the city’s side to be between $600,000 and $700,000, bringing the overall somewhere in the $1.3 million to $1.4 million range. Sicard anticipates the park to open “around Memorial Day weekend next year.”

The skate park will feature a pump track running around it — something Sicard says will be the “jewel” as the park’s most expensive feature.

“We got the idea from a similar park in Kanab, Utah,” Sicard said. (Link here for video of Kanab Skate Park.) 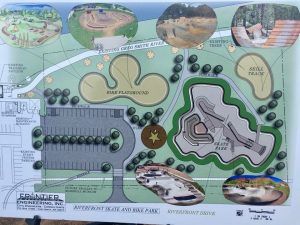 The goal of the park, Sicard said, is to have something for all ages, including a small track for strider bikes and children still on training wheels. There will also be intermediate and advanced tracks for teens and experienced riders.

“This will be a true park, where there is not just one thing to do but multiple things, to hopefully maximize usage and appeal,” Sicard said.

He continued: “We want it to be a regional destination, and we’re not aware of a combination bike and skate park like this one in the region. There are some separate trails in Northwest Arkansas, but nothing that combines the two. It will also tie in with the Greg Smith Riverfront Trail so you can connect to that if you want. There are just a lot of different opportunities there for tourists and locals to come downtown, stay downtown, eat downtown, and go to the Marshals Museum (when it opens).”

The park will be free to families as well, something Sicard says “we sometimes lose sight of as to how beneficial that is — an outdoor activity that does not cost anything.”