University of Arkansas Chancellor Joseph Steinmetz during his “State of the University” message on Thursday (Sept. 14) outlined priorities for the 2018-19 school year, including investments in faculty, improving graduation rates and an expanded focus on research.

He also spoke of the significance of a $120 million gift made in August by the Walton Family Charitable Support Foundation to establish the UA School of Art. One aspect of the university Steinmetz did not mark as a priority was enrollment growth.

“The end is in sight” for a period of yearly enrollment increases that have resulted in some growing pains, he said in the address, which took place at the Faulkner Performing Arts Center on campus. “We cannot continue to grow as we have in the last 10 years or so.”

“In an era where state funding has not kept pace with inflation, this growth has helped generate precious revenue and helped to improve our educational quality,” he said. “While enrollment growth has undoubtedly created some stresses around campus as we’ve adjusted, it also speaks to the reputation of quality and value of a University of Arkansas degree.”

However, major investments in infrastructure will be needed if the school grows beyond 30,000 students, and Steinmetz said, “Using steep tuition increases to pay for it is not an option.” Steinmetz lined out a detailed strategic plan with specific goals and action items for 2018-19 on the UA website. 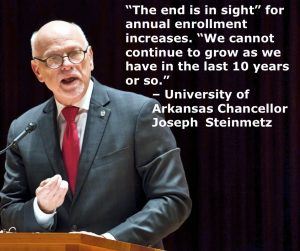 The school took in $13.5 million in new revenue this past year, partly because of enrollment growth and a 1% reallocation of administrative funds to support of academics, Steinmetz said. Of that new revenue, 66% or $8.9 million will go toward salary increases for faculty and staff, he said, “so that we can make some progress toward closing the gap between our salaries and the salaries of our benchmark schools.”

Steinmetz also announced an increased focus on student success programs, where the school plans to invest $1.2 million for next year. Key areas include enhanced recruitment efforts and retention, looking at more individualized services and earlier intervention for students who might potentially drop out.  Steinmetz said financial need is one factor tied to drop-out rate. Between 2006 and 2015, there was a 3% graduation rate among students with an unmet need — the gap between aid that doesn’t need to be paid back and the amount a family can pay — of more than $15,000.

One tool the administration intends to use is a new program called Arkansas STEP (Student Talent Enrichment Program), which offers need-based grants, in addition to peer mentoring and other support. Steinmetz seeks a 5% to 10% improvement in six-year graduation rates by 2023.

Another priority for 2018-19 is the support of collaborative research. To that end, Steinmetz in March founded the Chancellor’s Discovery, Creativity, Innovation and Collaboration Fund to support new projects designed to enhance the university’s research programs. It’s a $1 million fund, and the Razorback athletics department provided $750,000 to it, according to Steinmetz.

In a question-and-answer session following the speech, Steinmetz also reaffirmed support for UA students and others who are under the protection of the Deferred Action for Childhood Arrivals program, on which he issued a Sept. 1 statement. He praised the importance of DACA recipients in U.S. society and noted the “great contributions made by these individuals.”

President Donald Trump recently rescinded the policy protecting those individuals who are illegal citizens because they were brought to the country as children.