Personal income growth in Arkansas came in just below the national average in the second quarter of 2017 as the U.S. farming economy remains stuck in a prolonged downturn due to lower prices for grains and other crops.

Nationwide, state personal income grew 0.7% on average in the second quarter of 2017, after increasing 1.4% in the first quarter, according to quarterly estimates released Tuesday (Sept. 26) by the Bureau of Economic Analysis.

Personal income in Arkansas grew at a tepid rate of 0.6% in the second quarter, one percentage point below the national average and well below 2% in the first quarter. That amounts to more than $122.5 million of inflation-adjusted real personal income for the highly-watched economic indicator of net earnings of U.S. workers from all sources.

Overall, each of the major aggregates of personal income – net earnings, property income, and personal current transfer receipts – grew more slowly than in the first quarter. Personal income grew 1.3% in Nevada, faster than in any other state. Utah had the next fastest growth at 1.1%. Iowa, Nebraska, and West Virginia had the slowest growth in personal income, with each state growing less than half the rate of the nation.

On average, earnings increased 0.8% in the second quarter of 2017, after increasing 1.5% in the first quarter. Earnings growth ranged from 1.6% in Nevada to -0.1% in Nebraska, and was the leading contributor to growth in personal income in most states.

In Arkansas, University of Arkansas Division of Agriculture officials said while farmers across the state were spared the worst of the destruction wrought by Hurricane Harvey, many growers in the eastern portion of the state are dealing with the storm’s impacts. Bands of stormy weather spanning out from Hurricane Harvey in late August and early September dumped upwards of 10 inches of rainfall in some eastern Arkansas counties, impacting tens of thousands of acres of both rice and soybeans in the state. 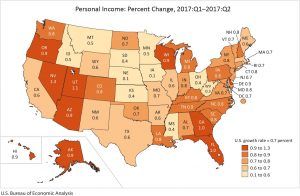 Arkansas rice growers, already besieged by flooding in the spring, pushed to speed harvest operations through the weekend of Aug. 25-27, said Jarrod Hardke, extension rice agronomist for the University of Arkansas agriculture division.

According to the Creighton University Rural Mainstreet Index, farmland prices have declined for 46 straight months and agriculture equipment sales have been in a downturn for 49 months.

Jeffrey Gerhart, president and chairman of the Bank of Newman Grove in Newman Grove, Neb., said grain farmers won’t know the shortfalls until after harvest, depending on yields and prices.

“For those farmers who have a shortfall, we will work with them in order to help their operations make it through the rough times,” Gerhart said.

For the rest of the nation, earnings grew in 20 of the 24 industries for which BEA prepares quarterly estimates. Earnings growth in three industries – health care and social assistance; professional, scientific, and technical services; and finance and insurance – was the leading contributor to overall growth in personal income.