The natives are getting restless. Can you feel it? It always happens this time of year.

“The long, horrible nightmare is finally over,” Tusk to Tail proclaimed exactly five years ago. It had been a long offseason that included the Bobby Petrino scandal and former Vaudeville star John L. Smith coming back for a wheelbarrow full of cash and the name of a good bankruptcy lawyer.

We were ready for some football. We thought the Hogs were going to be good that year, because being an Arkansas fan turns us all into idiots. Petrino had built a finely tuned Ferrari. What could possibly go wrong by tossing the keys to our teenage son Smith on prom night? Besides, we were just biding our time until Jeff Long found the next big time coach to anoint with his tears and many, many more wheelbarrows full of cash.

I won’t rehash what TTT calls “the season from L,” mostly because I blacked out for significant portions of the drubbings we took. But as Long told us early and often, he had found us a winner.

Bret Bielema’s origin story sounds like a rejected Game of Thrones script. The hog farmer’s son of Prophetstown ascends from walk-on to team captain through the teachings of a prominent disciple from the House of Broyles. The student becomes the master, leading a Badger battalion to the Bowl of Roses thrice consecutively. Finally, our hero is summoned to the kingdom Broyles built to call the Hogs unto eternity, or at least until the north end zone is complete.

Every superman has his Lois Lane, and the first lady of Arkansas football plays the part. For most of us, a good weekend in Las Vegas means you broke even and went home with a hangover. Bielema came home with the digits of the prettiest girl in the room. The story is that Jen sat next to Coach (he told her he was a grad student), he taught her how to play blackjack, and they lived happily ever after. I believe in love at first sight and all, but it may be worth noting that most people learn to play at the $5 tables. I assure you Bret Bielema does not sit at the $5 tables. Eventually the princess wed Shrek, and this summer bore him a daughter.

Briella Nicole Bielema was the first child born to an active Arkansas coach since the Broyles twins arrived in 1958. Coincidentally, Briella’s birth preceded the passing of legendary coach and athletic director Frank Broyles by barely a month. The Arkansas football circle of life is complete.

In 2013, Bielema had taken over a program about which Mark Wagner had said, “I would call that a dumpster fire, but that would be an insult to most dumpsters.” Coach B immediately improved the team culture, bringing stability to a program in need. Grades and graduation rates went up, while the number of player arrests and penalties has gone down. But have the wins followed?

Phil Harrison of collegefootballnews.com did an excellent job pointing out that while Wisconsin keeps on keeping on after Bielema’s departure (41-13 overall, 26-7 in the Big Ten, and two division titles), the Head Hog has yet to put it all together here (25-26 overall, 10-22 in the SEC).

Sure, last year’s 3-5 conference record was better than the 17 straight SEC losses we suffered from 2012-2014, but if you’re a season ticket buyer attending all the games like Tusk to Tail, that’s like saying a left foot to the groin is better than being kicked by the right.

We are not sports writers relying on credentials, statistics, and press releases furnished by University. 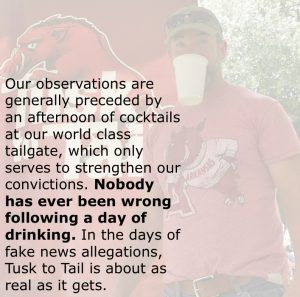 We are dyed-in-the-Pantone-201-colored- wool Razorbacks fans, attending games in Arkansas and on the road since the 1970s. Craig May has only missed one game since 1999. He’s riding a streak of 158 straight, and 238 of the last 239 Razorbacks games. At least some of our group was with him every step of the way. Tusk to Tail willingly buys the tickets and takes the ride.

Of course, doing so makes us a customer of Arkansas football. If that customer experience is less than satisfactory, we do what anyone else would do these days: get on the internet and bitch about it.

Our observations are generally preceded by an afternoon of cocktails at our world class tailgate, which only serves to strengthen our convictions. Nobody has ever been wrong following a day of drinking. In the days of fake news allegations, Tusk to Tail is about as real as it gets.

The natives are getting restless.  Can you feel it?

“We’re in year five,” Bielema said on the SEC Network this summer.  “I totally get it. These are my guys, my players.”

TTT still believes in Bielema and his brand of ball. A balanced ball control offense led by mammoth linemen in the trenches and versatile tight ends who can block and catch should win a lot of games, as long the defense holds up its end. But at crucial times last season, the Hogs could neither run the ball nor stop the run, struggling mightily in the ever-so-important blocking and tackling categories. The season culminated with two embarrassing second half collapses at Missouri and against Virginia Tech in the Belk Bowl.

After three years of steady rebuilding, Bielema’s season win total was lower than the previous year for the first time at Arkansas. To buy time and job security, Bielema had to throw a couple of bodies out the door. New Defensive Coordinator Paul Rhoads was promoted from the Secondary to install a new 3-4 defense, which has been far more effective at injuring linebackers so far in practice.

It has been reported that our run defense has improved under the new scheme. All I know is that every time I see a practice report, previously-unheard-of players including walk-on quarterbacks Carson Procter and Jack Lindsey, have scored a long touchdown against our starting D.

Making matters much, much worse, leading returning rusher Rawleigh Williams III is no longer returning after he suffered the second serious neck injury of his career. Williams decided to walk away from the game while he still could, and his presence in the backfield will be missed.

All hope is not lost. Senior quarterback Austin Allen returns fresh and loose after eight months of not being continuously blindsided by a cadre of SEC defenders. His accuracy, leadership, and frankly, health will be crucial to the Hogs’ success this season.

Led by All American Center Frank Ragnow, the o-line returns mostly intact, but will need to play better to open up running lanes and keep the quarterback upright. Allen will be throwing to a group of talented, but mostly untested receivers.

As for the defense, the 3-4 scheme raises concerns due to our lack of linebacker depth. With little doubt that the conversion is a work in progress, I’ll reserve judgment until seeing them on the field. Fortunately, the Razorbacks have some defensive playmakers, including McTelvin “Sosa” Agim on the line, linebacker DeJon “Scoota” Harris, and Ryan “I need a nickname” Pulley at cornerback.

Can Arkansas win more than seven games in the regular season for the first time since Bielema was hired? If you’re a self-described realist, like Jack Clark or John Scott, looking purely at the numbers, the coach’s recent track record and lack of experienced players may lead you to say no. If you’re a historian or a homer like Mark Wagner and Greg Houser, you could point to the many times the Razorbacks shocked the world when nobody gave them a chance, and say maybe.

If you’re like the rest of Tusk to Tail, you look to the bar, and say, “Please make it a double. It’s almost game time.”

Check back next week and before every game to see how the tailgating gang predicts it will all shake out.

Of course we all want Arkansas to win every game, perhaps no one more than Bielema and Long. That’s good. It’s hard to sell 7-5 when they’re building brand new luxury suites where your office used to be.

The natives are getting restless. Can you feel it?
––––––––––––––––––––
Editor’s note: Welcome to the sixth season of Tusk to Tail – the sport of tailgating as organized, performed and perfected by a group of Hog fans who have been tailgating together sober and otherwise for more than a decade. Members of the Tusk to Tail Team are Sean Casey, Jack Clark, Dale Cullins, Greg Houser, Craig May, David Rice and Mark Wagner. Tusk to Tail is managed by Talk Business & Politics against the advice of attorneys and family. The diehards may also be followed on their Facebook page. Or follow the crew on Twitter — @TuskToTail