An entrepreneur from Canada is hoping a deal with Wal-Mart Stores that includes frozen tea pops will push the company into the black.

Dionne Laslo-Baker, a medical toxicologist by trade from British Columbia, made the long trek to Bentonville recently to pitch her organic juice bars dubbed “Superfruit Freezie.” She was one of more than 550 hopeful suppliers to get an appointment with a buyer during Wal-Mart Stores’ fourth Open Call event for suppliers on June 28.

Laslo-Baker and associate Becky Julseth, director of business development for the startup, made the all-night drive to Bentonville from San Antonio, Texas. They met there with executives from grocery chain H-E-B, which already carries their product.

“It’s been a whirlwind couple of days to get here but so worth it,” Laslo-Baker told Talk Business & Politics-Northwest Arkansas Business Journal shortly after her buyer meeting at the Walmart Home Office.

Laslo-Baker pitched several items including frozen tea pops which were an inspired from her two kids, now ages 15 and 13. She said in 2014 she dropped her full-time medical job and began DeeBee’s Organics, which makes certified organic popsicles — frozen and shelf-stable varieties. Laslo-Baker and her husband, an eye surgeon, spent more than a year researching the advantages of tea, experimented with fresh fruit combinations and the first teasicles hit stores in Canada in late 2013.

‘GET OVER THE HUMP’
Though DeeBee’s is based in Victoria, British Columbia, her certified organic production takes place in California, which qualified the company to present as the Open Call, which seeks products that support U.S. jobs. Laslo-Baker said there is a small team based in the U.S.

Laslo-Baker said it’s been a long road to get the company up and running on a sustainable level.

“We are selling products all over Canada and in some parts of the U.S., but we are still not at breakeven levels now more than three years into the business,” she said. “We have three mortgages on our home, and my husband has been subsidizing the business. We believe this deal with Wal-Mart could give us the scale we need to get over the hump.”

DeeBee’s Organics handles its own production in California and leases a certified organic facility there. Laslo-Baker said with the new Wal-Mart deal, it will be interesting to see which executive wants to relocate to the U.S. as someone will likely need to do so. Wal-Mart gave Laslo-Baker the green light on her shelf-stable “Superfruit Freezie” products which are gluten free, certified organic, Kosher, vegan and contain between 40 and 45 calories per pop. The juice bars have no added sugar and contain 100% real fruit juices. Laslo-Baker said the Superfruit Freezie was launched in Canada earlier this year and was touted as one of the best new snack items for grocery.

“Our Superfruit Freezie is mostly fruit juices and the competitors on the market contain an average of 3% fruit juice, and with more sugars and dyes,” she said. “That’s why Whole Foods likes and sells our products. Wal-Mart doesn’t have a frozen buyer at this time, but they were interested in our frozen teasicle line that infuses fruit and herbal tea at a later date. We hope to get with the frozen buyer when one becomes available.”

Julseth said she is excited to work with the Wal-Mart buyer to help revamp the company’s packaging, given they are a women-owned business and products are made in the U.S., which should be prominently displayed on the packaging.

FAMILY MISSION
Laslo-Baker said retailers who sell her company’s product in Canada thought they would initially sell 20 boxes a week. They are selling more than 300. 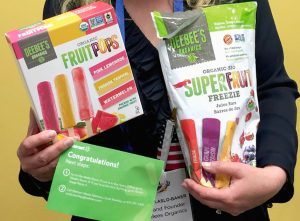 “It will be exciting to see how this new product does in the U.S. with Wal-Mart,” she said. “We are eager for the business to take off because my husband wants to donate the majority of his time volunteering for ORBIS, which is a charity eye hospital that flies around the world restoring vision in parts of the world, and also teach doctors abroad how to do sight-saving surgeries.”

Laslo-Baker said another area on which the company focuses its support is the LGBT community, and the Trevor Project, which provides crisis intervention for LGBT youth. Laslo-Baker said the reason she started the company was to eventually be able to make meaningful contributions to charities that are important to the family. Getting the company to break-even level will be a major milestone and mean there is more time to volunteer.

“That is just how women are wired,” she said.

Laslo-Baker said the company is very much a family affair. Her children Josilyn, 15, and David, 13, run the company’s social media campaigns and also present at trade shows because the teasicle was their idea when they were 8 and 10.

SERENDIPITOUS DISCOVERY
Julseth said she began to notice Wal-Mart was adding more organic products while researching the topic and landed on Wal-Mart’s Made in the USA website, where she saw the invitation to Open Call. That prompted her to send in an application, which led to an appointment.

“We just couldn’t believe it. But here we are, and we have fallen in love with this little town,” Julseth said. “We will have a lot to do when we return home to get this ball rolling with Wal-Mart, but we couldn’t be more excited and grateful for the opportunity.”

Wal-Mart Stores CEO Doug McMillon reposted Laslo-Baker’s photo holding the green card on his personal Facebook page following the Open Call, citing it as one of his favorite moments of the day.

Wal-Mart has made an effort to expand its organic foods in the past couple of years and Steve Bratspies, chief merchandising officer for Walmart U.S., recently said during the retailer’s shareholders week that Wal-Mart’s focus on organic products is important because the category continues to grow in popularity.

“What we are doing at Wal-Mart is continuing to reduce the price gaps between organic and non-organic items because too often organic products are out of reach for a lot of customers because of the price premiums today,” he said. “Does it cost more to produce organic? Yes it does, and there needs to be a little bit of price premium for that. But it doesn’t have to be the gap you see in a lot of places in the market. We are going to deliver great organic quality and compress that price gap at the same time.”

Laslo-Baker said the Superfruit Freezies packs have been retailing for $5.99 for 12 bars with other retailers. She said its likely Wal-Mart will get a better price than that, and hopefully sell more in the process, because that is the only way the retail giant does business.
–––––––––––––––––––
Editor’s note: The Supply Side section of Talk Business & Politics focuses on the companies, organizations, issues and individuals engaged in providing products and services to retailers. The Supply Side is managed by Talk Business & Politics and sponsored by Propak Logistics.