What is the best and worst decision you’ve ever made? Best: Moving to New York to work. Worst: Not finishing college because I moved to New York. Kind of a toss-up.

What was your dream job as a child and why? I wanted to be a music producer. My father was a musician. Although I didn’t get his talent, he always told me I had the “ear” and “eye” for musical talent and potential and encouraged me to put it to good use.

What do you think is the most significant barrier to female leadership? Thanks to nearly two generations of women knocking down barriers and stereotypes, the younger generation of women don’t seem to see or experience those barriers as we once did. More women are entering public service, and technology has opened new opportunities for women to be more independently successful or, if they choose, part of a collaborative team. Progress still needs to be made, particularly in terms of pay equity. But the external barriers we once faced are mostly a fading memory.

What woman inspires you and why? Michelle Obama — grace under fire, independent, strong, wise, kind, still a bit of a kid, street-smart and promotes a positive view of the future.

What’s something about you others would find surprising? That I’m basically shy.

How do you spend your free time? Outdoors as much as possible, listening to and editing music and videos, and trying to learn how to create and weld outdoor sculptures.

What led you to ProComm Communications? The broadcasting and advertising industries were undergoing major changes with the introduction of cable, and a fragmented competitive landscape was negatively impacting programming and profits. News was “if it bleeds it leads,” and community service was sacrificed for more commercial time. Several of my clients and associates encouraged me to break out on my own. ProComm was created to do community work to help nonprofits as well as commercial marketing and communications. 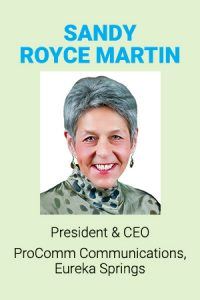 Why did you become interested in marketing and communications? I was raised by two creative parents who insisted I never grow up and always stay curious. Marketing and communications is about learning the process of how and why things work — or don’t work, applying creative thinking, research and communicating the results in a compelling, honest story. It’s great continuing education and never the same — a lifelong learning experience that fascinates me because it’s dynamic and challenging.

You helped in the campaigns for the Eureka Springs anti-discrimination ordinance, the Arkansas medical marijuana amendment and the Fayetteville uniform civil rights protection ordinance. Why were these issues important to you? Discrimination is wrong and unacceptable, period. If anyone’s rights are restricted, stripped or compromised in any way, a very slippery slope is created to erode other people’s rights. With medical marijuana, I had first-hand experience with my mother and her battle with cancer. The difference between seeing her on legalized drugs, doped out and still in pain contrasted with the quality of life and pain control she experienced once we switched to medical marijuana was an eye-opener.

You’ve won five Emmy Awards, two National Association of Broadcasters Service to Children awards and four New York Festivals Awards. Which award are you most proud of and why? The NAB Service to Children — it was for a national series we did called the “What’s Up Network.” I have a passion for youth projects and watching young creativity blossom when given a chance.

You are president of the Northwest Arkansas Film and Entertainment Commission and co-founder of the Eureka Indie Film Festival and the Crystal Bridges Museum-Tri-Market Tourism Collaborative. Why are film and arts important to you? Creative thinking and expression are important to me as the building blocks to problem solving whether applied to professional or personal life experiences. Arts and film come in a rich package of storytelling and visuals that connect and expose people to cultural variety, history and escape. As a window to the world, arts and film make us think, question, laugh or cry. An appreciation for arts is an appreciation for creative thinking and life itself.