What is one of the proudest moments so far in your career? When I was nominated by one of our clients, Paris Presents, and awarded the 2016 Women Owned Small Business Person of the Year by the Greater Bentonville Area Chamber of Commerce. It was a huge honor for me and the company. Also, a campaign that was done for Tyson Foods. It was called “Why Should Cookies Have All the Fun?” and was designed specifically to help boost sales of chicken nuggets during the holiday season. It was a nugget decorating program that helped to sell-through in a successful sales program. The media plan around the campaign even garnered the attention of Forbes magazine. This program was developed quite quickly, and during the brainstorming I was the one who asked the question, “Why should cookies have all the fun?” And we all looked at each other, and it stuck. Being an account service person at the time, it was pretty awesome that my headline was used.

What’s the most important lesson you’ve gotten throughout your career? It doesn’t sound sophisticated, but I call it the “icky feel.” If something feels icky, we probably don’t need to do it, be a part of it or accept it as a client. I’ve trusted my gut in meetings, with programs and with clients. As a small business, it is hard to turn down work, but we have done it. We have won pieces of businesses and after a while just knew they weren’t the right fit for us. It’s hard when your staff relies on you for their livelihood, but it has ultimately done us well.

When did you realize you wanted to go into advertising/marketing? I have wanted to be in advertising ever since I was little. I wanted to be Samantha in “Bewitched.” [Her husband] Darrin Stephens was the creative at an advertising agency, and he always would flub up a creative presentation to [his boss] Larry Tate and a client. Samantha would come in and make everything just right. I wanted to be her. When I was older I wanted to be Diane Keaton in “Baby Boom.” She was a powerhouse account lead, and I was going to be her. 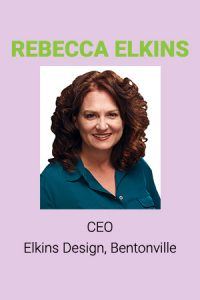 How have you adapted to change in your industry? In the last two years we have started adding depth into capabilities/competencies. We have beefed up our digital development team. They specifically have expertise in the digital arena in terms of creating and programming digital ads, apps and websites. We have a dedicated leader from an influencer standpoint that the team goes to help develop campaigns and manage influences. And from a social standpoint we have a copywriter who, prior to us, worked in the social media department for Kohl’s department stores. These are specialized talents and that gives us a competitive advantage for our current and future clients.

What’s the next big thing? The next big thing for digital marketers will be learning to craft our messaging and tactical plans in a way that’s cohesive with our audience’s expectations. In other words, too many marketers have relied on annoying technologies and gimmicks to shove their messaging in front of users who weren’t interested in what they were selling. And the backlash is coming around with ad blocking and services that don’t rely on traditional interruption advertising. For example, Netflix subscribers have now surpassed cable TV subscribers, due in no small part to their lack of advertising. Ad blocking is now turned on by default in many browsers. These are just a couple of examples, but the reality is we have to create content that’s entertaining, authentic and compelling — rather than relying on a captive audience. People do want to know when new products or services are available, as long as [the information is] relevant. It’s time we as an industry respect our audiences, and creating effective content in this new era will be a challenge for us all.

If you were going to write an autobiography, what would it be called? “I Get to Do This for a Living?” by Rebecca Hammond Elkins.