Serial entrepreneur and Hayseed Ventures CEO and founder John James encouraged 15 rising business stars under the age of 30 to be “unreasonable” in their approach to life and business.

James spoke Tuesday (May 16) to members of the 2017 Fast 15 group during their recognition event held at the Janelle Hembree Alumni House at the University of Arkansas. The event was sponsored by United Bank.

For nine years, the Northwest Arkansas Business Journal has singled out 15 up-and-coming professionals who’ve not yet turned 30. They’ve enjoyed success at a young age, from emerging entrepreneurs to those making an impact in large organizations in Northwest Arkansas and the Fort Smith area. (Link here to learn more about the 2017 class.)

James began his speech with a quote from Irish author George Bernard Shaw.

James, a self-described 40-plus-year-old Millennial, decided on his last day of residency to not become a doctor – turning his back on several years of training. He admitted that was an unusual move. He also noted that he read the bios of the Fast 15 in preparing for his address, and concluded that those in the group have also made life-changing moves.

“You are as unreasonable as I am, and I’m excited about that,” James said, adding that if the state is to grow and prosper in the decades to come they must continue to be aggressive in their leadership. 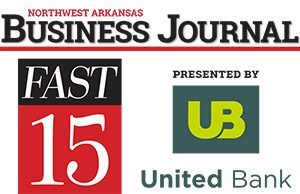 James was one of a group of Northwest Arkansas entrepreneurs who turned the idea of selling medical scrubs online into Acumen Brands – which would eventually capture more than $100 million in venture capital and make its name as one of the nation’s largest online retailers of cowboy boots.

Hayseed Ventures, based in the Old Post Office on the Fayetteville Square, is a “venture capital production studio” geared to birth valuable byproducts. James and his associates raised more than $3 million to fund emerging ideas. James and Hayseed Chief Operating Officer Scott Andrews met with 106 startups in 10 months.

James during his Fast 15 address outlined his successes and failures. He stressed that he learned valuable lessons from both. But in the past few years, began to believe that, while money is important, he was more interested in finding a way to “be significant.” About three years ago he began to “struggle” with where to go next in life, and began to “explore significance” and how he could give back to other entrepreneurs and the community. Hayseed Ventures is part of that exploration.

To that point, James challenged the audience to believe that Northwest Arkansas and the Fort Smith area is the place where big things can happen in terms of creating new economy companies.

“We can build these things here, but it takes unreasonable people to do it. It takes people who are a little nuts,” James said, adding later, “that’s what I’m going to be doing for the next 10 years.”

James told the Fast 15 members they have an advantage over him because an entrepreneurial support system has been built in Northwest Arkansas and other areas. He said the system is vibrant, and they have the opportunity to “stand on the shoulders” of those unreasonable people who plowed that ground.

He ended his address with another quote. Reading from President Theodore Roosevelt’s “Citizens in a Republic” speech, James noted that anyone can be a critic, but to achieve progress, “credit belongs to the man who is actually in the arena, whose face is marred by dust and sweat and blood; who strives valiantly; who errs, who comes short again and again, because there is no effort without error and shortcoming.”

As to that effort, James told the audience: “Go do that, please.”