John James is passionate about the myriad challenges and limited opportunities of turning an idea into a multi-million dollar enterprise in Arkansas. He’s done it before, is doing it now, and says more should be done by governments and the business community to foster startup success.

James, a self-described 40-year-old Millennial, was one of a group of Northwest Arkansas geniuses who turned the idea of selling medical scrubs online into Acumen Brands – which would eventually capture more than $100 million in venture capital and make its name as one of the nation’s largest online retailers of cowboy boots.

That’s right. They moved from uniforms for the operating room, to selling kickers for the dance floor at Gilley’s. It’s simple. You start out selling medical scrubs, tinker with the concept, figure out how to maximize visibility through Facebook, get the family behind Little Rock-based Dillard’s to throw some fuel (cash) on the fire, and boom, Country Outfitter emerges. The story is certainly more complicated than that, but to James, the lesson from Acumen is in the recipe.

“You put a bunch of smart people in (a room) who have cash flow and funding and then who knows what spins out of the ideas. The byproducts of the work are often more valuable than the work itself,” James said.

What’s more, in the pre-Acumen days, the smart folks in venture capital board rooms around the U.S. didn’t believe a tech success could germinate in Arkansas.

While innovation labs, maker spaces and entrepreneurship events are growing in number, the rubber-meets-the-road work is in sifting through hundreds of ideas and then connecting viable ideas with money, management and marketing. The best bets for startup successes are in the areas of data, retail, logistics and possibly agri-tech, according to James. That’s where Hayseed Ventures, a company James founded about 11 months ago, is placing its focus. 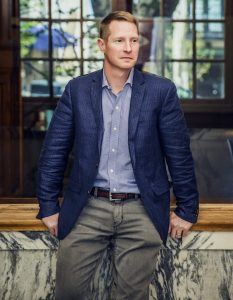 THE FRUSTRATION
The recipe for startup success excites and frustrates James. The frustration is in what he calls “the gap,” which is capital support between $250,000 and $1 million. That level of funding is critical for a startup with a viable business model but needs an infusion of cash to scale it up.

Roughly, the model works like this: a startup gets funded by friends and family. If it has legs, it will then need a Series A round ($1 million to $5 million) to keep growing. That is followed by a Series B (around $10 million) to scale up.

“Series B is where the jobs are created. … When Dillard’s invested in us, we were a pretty valuable company and it was really fuel on the fire at that point,” James said.

Then the Series C venture funding hits. It can be around $100 million, and was $93 million for Acumen Brands. Series C preps a company for acquisition or to go public.

There are numerous venture capital funds that help with funding up to $250,000, but getting the growth capital cash is tough. How tough? James, who with Acumen had proved his ability to spin up a multi-million-dollar retail success, was only able in 2015 to raise $3 million for his Hayseed Ventures.

Hayseed, based in the Old Post Office on the Fayetteville Square, is a “venture capital production studio” geared to birth valuable byproducts. He admitted that trying to raise $6 million for Hayseed was a “high goal,” but is pleased with the $3 million. It’s a sign of progress in Arkansas’ venture capital ecosystem.

“It’s a small step, but it proves that it can be done and it would have been impossible five years ago,” James said, adding that he is confident other venture capital groups based in Northwest Arkansas will grow their investment access. (Just a few days after the interview with James, it was announced that Bentonville-based NewRoads Capital Partners had partnered with Los Angeles-based Kayne Anderson Capital Advisors to form Kayne NewRoad Ventures II that will help provide some of the growth capital of which James said was needed.)

Scrub Shopper is a medical uniform company Hayseed bought from Acumen. It’s the company James is the most excited about because it has the byproduct potential he says is key to be another Country Outfitter-type success.

THE EXCITEMENT
Excitement for James from the recipe is in how the deck is stacked against success. Seriously. The incredible odds against success that would frustrate 99% of people is what keeps James in the hunt. All he needs is a whiff of possibility. If he ever took time to visit Crater of Diamonds State Park in Arkansas, he’d want to know why only 37 acres are plowed for searching, and why he has to leave at 5 p.m. when the park closes.

Only one out of 10 friends and family funding companies makes it, according to James. And of those, less than 30% will ever see a Series A round, and far fewer will ever get to the big leagues.

Which brings us back to Hayseed. James and Hayseed Chief Operating Officer Scott Andrews met with 106 startups in 10 months. They settled on working with just six of those. However, James was impressed with the number of applicants, and said it is a good sign for the state.

“I really had no idea there would be that many for us to meet with. … There were a few duds, but for the most part, most of those were great people with good ideas,” James said.

James admitted that he and Andrews are “dreamcrushers.”

But the honesty comes with pointers. James said they always try to provide tips on how to tweak the model. Piltdown Outdoor Co., one of the Hayseed companies, was initially rejected. Piltdown CEO Trey Anson returned with a fix for all of the reasons he was initially rejected. Anson was persistent. His blog details the first backpack he created: “That first pack took me two-thirds of forever to finish, and looked like something you’d take home from the bar at 2 a.m. It had all the right stuff on it but the seams were a little busted up, the straps were cross-eyed, the zippers were missing teeth. I wasn’t going to show it to my friends but it made me happy and I had no regrets.”

To minimize their regrets, James and Andrews look for a business idea with the potential to gear up quick and be a $10 million company with a relatively small amount of capital. Once found, they might join the management team, create or refine a business model, or help get initial traction with customer acquisition and marketing. As James says, he gets amped up moving a company “from zero to 30 miles an hour.”

“I feel like my place in life … truthfully it’s from that half-million to $1 million revenue to $10 million. That’s my sweet spot. I love it. I’m kind of like a marketing plan in search of a product,” James said.

To that point, James said it is necessary for himself and others in startup leadership to know their limitations.

“You have to be able to ask for help when you need it. … You have to ask, ‘Am I in my sweet spot?’” James said, adding that “the people who build the bridge are not always the people needed to operate the bridge.”

THE SUCCESS EXAMPLE
Menguin, an online tuxedo rental company, is a good example of a company nurtured by James and Hayseed. A Silicon Valley Bank rep called James about a company with roots in Atlanta and Dallas that had a good idea but needed help to reach its potential. James called the Menguin partners and invited them to Fayetteville for a day to “whiteboard” ideas.

The company was then doing about $5,000 a month, and James liked what he saw and what he was hearing during the Fayetteville meeting.

“I told them, ‘It’s a shame you guys aren’t here in Fayetteville because I could really sink my teeth into this problem and help you, help you scale,’” James said.

About two hours after the whiteboard session the Menguin partners called to inform James they were moving the entire operation to Fayetteville. James worried aloud to his wife that maybe he was the dog that had caught the van.

But within a few months and with marketing and customer acquisition help from Hayseed, Menguin grew from a handful of people to about 20 employees. They outgrew the second floor space at the Old Post Office. Sales were closer to $5,000 a day. The company is “in the process of raising a very nice round of capital,” James said in the early April interview.

The Menguin story also speaks to the value of relationships James and other venture capital leaders in Northwest Arkansas are building. Without his profile through Acumen, the Silicon Valley banker may not have known to connect James with Menguin. Those relationships are building connections and trust with the investment community around the country.

“It makes the job easier. I’m the same idiot I was five years ago, but now I know more people,” James said.