The commercial real estate broker at KCP Real Estate and Ward 1 Director is now under contract to purchase the C&H Tire building from owner Jerry Hamel. While the deal has not closed, Lau is comfortable it will and has already had conceptual art rendered by Shannon Reith of Studio 6 Architects for a planned restaurant, rooftop bars and two additional lease spaces.

Lau told Talk Business & Politics on Monday (May 1) he plans to spend around $1.5 million to turn the development into what commercial realtors call a “white box space.”

“White Box” terminology generally refers to the interior condition of either a new or existing building where improvements consist of components like heating and cooling (with delivery systems), lighting, electrical switches, outlets, lavatories, a finished ceiling, walls prepped for painting, and a concrete slab floor. Lau will be adding an elevator as well.

“This is a conceptual plan, which means that I don’t have a restaurant yet, I don’t have any retail yet, and I don’t have a cigar shop or cigar bar on the corner. I just had this designed to say, ‘Hey, this would be a really cool space,'” Lau said, adding the idea is to ready the building so an outside tenant can customize it to their needs.

“It may be that there are three retail bays there now, but it may end up being one retail bay for one big user. Or, on the restaurant side, they (the tenant) may say, ‘We don’t want the corner bar. We want that all to be the restaurant.’ All that evolves as far as who your tenant is,” Lau said.

While that may be the case, Lau has a specific vision in mind.

“My dream is a restaurant that has a breakfast, lunch, and dinner menu,” Lau said, citing examples like Foster’s Pint and Plate (in Rogers, Ark.) and Tusk and Trotter (in Bentonville, Ark.) as ideal anchor tenants. “I want to find a user, who would ultimately be interested in signing a long-term lease — 7 to 10 years — and that would be the generator to lease out the other two spaces.” 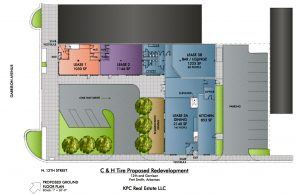 Lau acknowledges the investment to be “speculative” with some risk involved. “As a real estate investment, it’s got to make money. But I’m excited about doing it, and it’s good for downtown. It may be a slow play. It may be one of those deals where I buy the building and sit on it until I can get the right person to come in because I’m not going to lease it to just anyone. I want somebody who’s a good operator, someone I can trust and who has a good backing.”

Lau continued: “It would just be cool to put money into downtown. If we play it right, then Fort Smith really could be an entertainment venue. And what a lot of people don’t realize because they get caught up in the (Walmart) Amp or Tulsa, is that to the people that live in Spiro and Muldrow and Charleston and Mena and a lot of the areas around here, we are their Tulsa.”

With the project moving along in its development stages, it joins a previous announcement from General Pallets and The Park at West End owner Phil White, who told fellow Central Business Improvement District (CBID) commissioners at a recent meeting he would redevelop the 900 block of Garrison Avenue to include space for retail, a restaurant, and “11 or 12” 2nd floor studio loft apartments.

For CBID commissioner and First National Bank of Fort Smith President and CEO Sam Sicard, the investments are the latest examples of business leaders and citizens putting their money where their mouths are when it comes to strengthening downtown Fort Smith.

Sicard told Talk Business & Politics he believes five things are driving the growth of the downtown area — “the success of past private developments in downtown over the last several years; public investment in our downtown, particularly the sidewalk and landscaping improvements and riverfront trail; the urban design downtown plan that 64/6 Downtown has been engaged with; the energy and enthusiasm that has been created by downtown events such as The Unexpected, Peacemakers Music Festival, Steel Horse Rally, and many others; and the increase in our residents who work downtown due to the relocation of employers.”

“Specifically Propak, but there are others,” Sicard added.

Just putting some numbers to a few of the mentions, Propak moved into the Friedman-Mincer building and launched a $3 million award-winning renovation in 2016. The Unexpected art murals project is moving into its third year and has risen to international acclaim with more than 5 million views on social media as of September 2016. The Steel Horse Rally, specifically targeted at motorcycle enthusiasts and music lovers, has brought an estimated $12.618 million economic impact to the region in just two years.

Additionally, the U.S. Marshals Museum — considered by some a linchpin of downtown’s future economic development — has finally announced a hard open date of Sept. 24, 2019 while accelerating fundraising efforts.

In short, the last three years have been a good run for the area, and in another year, Sicard believes “we will see more jobs, retail stores, and restaurants downtown, and less vacant buildings.”

“That being said, it will most likely take several years to fully develop downtown to what many of us believe is its full potential as a regional destination,” Sicard said.

Facebook Comments
Previous post
The Supply Side: Wal-Mart suppliers could see new opportunities with Lidl
Next post
Evacuations underway in Success and in eastern Pocahontas as historic floodwaters loom