Officials with Phoenix Investors say the former Whirlpool manufacturing facility in Fort Smith is a “diamond in the rough” and they plan to spend $10 million in the next 6 to 9 months to open and brighten the inside with white paint and new lighting.

The company, which manages around 17 million square feet of commercial and industrial space in 22 states, plans to seek numerous tenants to operate out of the large space. Phoenix Investors President and CEO David Marks told a crowd of about 60 people gathered for Thursday’s (April 20) change of ownership ceremony that Fort Smith will be the fourth former Whirlpool plant the company has “repositioned for redevelopment.” He said the company has had success in finding new tenants for former Whirlpool plants in Illinois, Iowa and Tennessee.

“We understand the bones of these structures,” Marks said, adding that facility is a “diamond in the rough.”

Marks said companies who are tenants in other Phoenix properties include Briggs & Stratton, Kohler, Georgia-Pacific, Delta Faucets, “and even Whirlpool.” In a statement provided by the Fort Smith Regional Chamber of Commerce, Marks said, “Our core focus and competency lies in restoring legacy industrial properties back to their original greatness. We will bring quality companies and jobs back into the former Whirlpool Complex; we already have a list of prospects.”

Chamber President and CEO Tim Allen told Talk Business & Politics that in his five years in Fort Smith he is asked two questions every week.

“What’s going on with the Mitsubishi building, and what’s happening with Whirlpool’s (building)? I no longer have to answer those questions,” Allen joked. 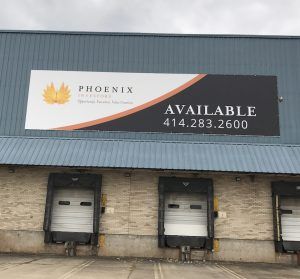 The huge Mitsubishi building in Fort Smith designed solely to assemble complex, multi-ton wind turbines was never opened by the Japanese company. In March 2016, York, Pa.-based Glatfelter acquired the empty 200,000-square-foot Mitsubishi building with plans to invest $80 million to transform it into a specialty materials production plant estimated to employ 83 when it is fully operational in late 2017. Glatfelter, a publicly traded company (NYSE: GLT), is a global manufacturer of specialty papers and fiber-based engineered materials used in coffee filters, baby wipes, adult diapers, feminine hygiene products, and a wide range of other products.

Allen told the crowd he is confident the redeveloped plant will result in “hundreds of jobs … in the very near future.” He also said the building, which is one of the largest open manufacturing facilities in Arkansas, will be easier to market to multiple tenants that trying to find just one tenant with a need for a more than 1 million square foot building.

WHIRLPOOL BUILDING BACKGROUND
Benton Harbor, Mich.-based Whirlpool Corp. closed the refrigerator manufacturing plant in June 2012, which at the time employed about 1,000, but was home to more than 4,500 jobs at its peak.

The loss of the about 1,000 Whirlpool jobs in Fort Smith will result in the overall statewide loss of almost 1,550 jobs and a labor income reduction of $61.15 million, according to an economic impact model prepared by Gregory Hamilton, senior research economist at the University of Arkansas at Little Rock, for Talk Business & Politics.

But the impact of Whirlpool jobs losses is deeper when considering the plant employed at least 4,500 in early 2006. Hamilton modeled the impact of Whirlpool jobs lost between early 2006 and today.The loss of at least 3,500 jobs since 2006 has reduced overall employment in the region by 5,141.8 jobs, and created a labor income reduction of $199.118 million. The 3,500 jobs lost also caused the estimated loss of 281 jobs outside the Fort Smith region, according to Hamilton’s report. The labor income lost statewide – including the Fort Smith region – from the lost jobs totals $214.026 million.

Later that year it was made public that trichloroethyclene – a cancer-causing chemical – was found in and around the plant. Whirlpool has been working to monitor and remove the chemicals, with oversight of the work handled by the Arkansas Department of Environmental Quality. ADEQ issued its first remedial action plan December 2013. Although the building will be owned by Phoenix, Whirlpool will continue to be responsible for environmental remediation.