It is the third year for a festival that began with a Facebook conversation and resulted in acts like Jason Isbell, Leon Russell, the Old 97’s, and Turnpike Troubadours playing Fort Smith.

The Peacemaker board on Tuesday (April 4) held a media event to discuss the 2017 lineup and their efforts to grow the festival.

Eleven-time Grammy-nominated singer-songwriter Johnson will lead Friday night’s slate. He has been called “one of the greatest country singers of our time” by the Washington Post, and has won two Song of the Year Awards from the Country Music Association (CMA) and the Academy of Country Music Awards (ACM). The Lonesome Song, his 2008 album was certified Platinum for one million in sales and his 2010 follow-up, The Guitar Song, achieved Gold certification. His best-known singles are “Color” and “High Cost of Living.”

Other acts performing on Friday (July 28) will include Andy Frasco & The U.N., Natalie Stovall, and the North Mississippi Allstars. Music will start at around 4 p.m.

On Saturday, Gov’t Mule will be the lead attraction with Split Lip Rayfield, Greyhounds, and Hayes Carll as lead-ins. Gov’t Mule is a four-member group consisting of Danny Louis, Jorgen Carlsson, and founding members Warren Haynes and Matt Abts. Originally a trio, fellow founding member Allen Woody died in August 2000. Gov’t Mule has been active for over two decades with 15 live and studio albums to their credit as well as millions of album and track sales and thousands of live performances. The band has also recorded with members of the Grateful Dead and The Who.

Capping off the Festival will be a Sunday (July 30) “praise God and pass the biscuit!” event that includes a brunch and live gospel music. Peacemaker bills the event as a time to “feed the hungry, the homeless, and the hungover.”

“We’re in our third year and we’re so proud of the success we’ve had. Our all volunteer board has worked really hard to bring another great festival to Fort Smith,” said Festival President Jeff Gosey. “Not only do we want to provide Fort Smith with a fun event, but we want to be able to give back to other organizations that provide much needed help to our residents.” 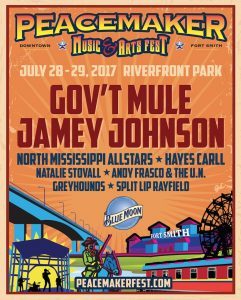 Some of those organizations receiving assistance from Peacemaker during the first two years have included Girls, Inc., The Children’s Emergency Shelter, and Developmental Wings. In year one, the event raised $10,000 with another $15,000 for year two. Along with the increase in giving, the Festival has seen steady growth from one year to the next with roughly 7,000 reported in 2015 and over 8,000 for year two. Gosey told Talk Business & Politics the organization wants to work with the Fort Smith Convention and Visitors Bureau (CVB) for 2017 to gauge economic impact to the region.

Gosey also praised Bill Neumeier, a downtown restaurant owner and Peacemaker board vice-president as being instrumental in the booking of talent for the event.

Tickets for the Peacemaker Music & Arts Festival will go on sale at 9 a.m. April 7 with individual days starting at $39 — the same price of a two-day early bird pass. There will also be a “VIP Early Bird” option starting at $129 available on the same day. VIP includes reserved area at the front of the stage, VIP parking, VIP “Express” Line, VIP Cash Bar, $20 worth of “Peacemaker Bucks,” and a bag of “Peacemaker Swag.”