The U.S. economy added a healthy 235,000 jobs in February as employers in the construction trade, manufacturing sector, health care field and private education services added nearly half of the new positions.

According to data released Friday (March 10) by the U.S. Bureau of Labor Statistics (BLS), the U.S. jobless rate in February remained steady at 4.7%, down one-tenth of a percentage point from the previous month when employers added 227,000 to payrolls. Over the past year, the nation’s unemployment figure has held at a range between 4.6% on the low end in November and 5% in March and April of 2016.

“February proved to be an incredibly strong month for employment with increases we have not seen in years,” said Ahu Yildirmaz, vice president and co-head of the ADP Research Institute. “Gains were driven by a surge in the goods sector, while we also saw the information industry experience a notable increase.” 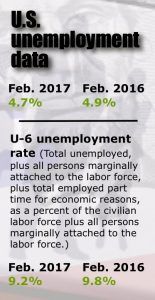 JOB SECTOR CHANGES
Construction employment across the U.S. increased by 58,000 in February, with gains in specialty trade contractors and in heavy and civil engineering construction. Construction added 177,000 jobs over the past 6 months.

Manufacturing added 28,000 jobs in February. Employment rose in food manufacturing and machinery but fell in transportation equipment. Over the past 3 months, manufacturing has added 57,000 jobs. Employment in mining increased by 8,000 in February, with most of the gain occurring in support activities for the oil and gas sector. Mining employment has risen by 20,000 since reaching a recent low in October 2016.

Job growth in professional and business services continued to trend up in February, adding 37,000 positions. The industry has added 597,000 jobs over the year.

On the negative side, retail trade employment edged down in February by 26,000, following a gain of 40,000 in the prior month. Over the month, job losses occurred in general merchandise stores, sporting goods, hobby, book, and music stores and electronics and appliance stores as J.C. Penney’s, Macy’s, Sears and other major retailers have announced job cuts.

Employment in other major industries, including wholesale trade, transportation and warehousing, information, financial activities, leisure and hospitality, and government, showed little or no change over the month.

WORKWEEK DATA, AVERAGE WAGES
The average workweek for all employees on private nonfarm payrolls was unchanged at 34.4 hours in February. In manufacturing, the workweek was unchanged at 40.8 hours, and overtime remained at 3.3 hours. Average hourly earnings for all employees on private nonfarm payrolls rose by 6 cents to $26.09, following a 5-cent increase in January. Over the year, average hourly earnings have risen by 71 cents, or 2.8%.

The Arkansas Department of Workforce Services will release seasonally adjusted job figures from the BLS on Monday (March 13). A snapshot of the Natural State’s employment picture for February will follow on March 24.