Personal income rose 3.2% in the Natural State in 2016, according to a report from the Bureau of Economic Analysis.

Personal income consists of net earnings by place of residence and property income. Last year Arkansas’ personal income growth was on par with the neighboring states of Missouri and Mississippi, slightly less than Tennessee and more than in Texas, Oklahoma and Louisiana, noted the report.

Arkansas fell at the low end of the average for all states which ranged from 3.6% to 4.5%. The bulk of the income metric is comprised from earnings. While Arkansas is still woefully behind other states such as Washington (6.3%) or Utah (6.4%), statewide earnings income stood at 4.1% in 2016, flat against the national average.

In all, 22 of the 24 industries covered in the report saw earnings growth last year. The biggest areas of earnings growth in Arkansas last year were in healthcare, a sector which grew at twice the rate of the next largest gainers, which were state and local government as well as corporate management. Retail trade income also grew at a healthy clip as did construction, finance and manufacturing of nondurable goods (namely food processing). The sectors with declining income in Arkansas included: oil & gas mining, transportation and military.

Dr. Michael Pakko, chief economist with the Institute of Economic Advancement at University of Arkansas Little Rock, said Arkansas’ economy performed well in this latest BEA report, placing around 27th. He said the state has continued to rebound well post recession. Since 2010 he said Arkansas’ income growth rate has been 3.2% against a 3.7% national figure. 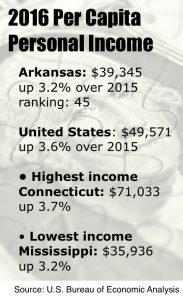 Pakko said healthcare is ripe for expansion given the aging population and new technologies being applied to treatments, patient care and disease detection.

“We also know healthcare is also comprising more of the household spend today in addition to being a top growing employment sector around the state and country. The growth in healthcare was not a surprise and we expect it to continue,” Pakko said. “I was pleased to see the construction sector also have a strong showing nationally and here in the state, that was a bit of surprise.”

Pakko said the state continues to make consistent income progress behind a strengthening overall economy with the core employment sectors growing jobs or at the very least holding their own. He agreed the addition of higher paying healthcare jobs around the state has the potential to grow per capita personal income for Arkansans in the next few years.