Four-year colleges in Arkansas saw an average 5.4% rise in tuition in 2016-17, and two-year colleges saw a 3.6% rise, according to the annual financial condition report from the Arkansas Department of Higher Education. The department pointed to a lack of upward movement in state funding over the years, in addition to rising cost in technology, employee benefits, and campus security.

The University of Arkansas at Monticello saw the biggest jump, both year-over-year and overall since 2011. Tuition and fees per semester were $7,210, up 12% from 2015 and up 36% from five years ago. Arkansas Tech University in Russellville was not far behind, posting a 7% increase year-over-year and 32% since 2011, with the cost reaching $8,280 this year, according to the ADHE.

Jim Brewer, director of media services for UAM, said the school has historically had one of the lowest tuition rates of publicly funded, four-year universities in Arkansas.

“In essence, that means that a small increase in the dollar amount in tuition and fees can appear to be a large percentage increase,” he said, adding that money raised from the tuition increase approved for 2016-17 will go to programs aimed at improving retention and graduation rates, including the construction of a Student Success Center.

UAM has a 28% graduation rate, according to the U.S. Department of Education’s College Scorecard. The median salary for UAM alumni is $31,300, below the national average of $34,300. The scorecard looks 10 years after enrollment, at students who received financial aid. About 55% of UAM students receive federal loans, and the typical total debt is about $15,000.

The University of Arkansas at Fort Smith has seen a 27% increase in tuition over the past five years. However, with a tuition rate of $6,701, it has the second-lowest price for public four-year colleges in Arkansas, according to ADHE. The lowest is University of Arkansas at Pine Bluff at $6,676, which saw a 25% tuition hike since 2011. Salary after attending is listed as $30,000 for UAFS and $27,200 for UAPB, according to the scorecard.

RISING COSTS ‘SQUEEZE’ SPENDING PRIORITIES
“Tuition increases are considered each year by the University of Arkansas System Board of Trustees and vary widely among our campuses relative to their individual needs,” said Nate Hinkel, director of communications for the UA System. “From a System standpoint, when you look at state funding, it’s up only about 3.8% since 2008. Compare that to the Higher Education Price Index, which is up 14.7% since 2008, and you can see the gap that needs to be addressed somehow. Rising costs of utilities, maintenance and simple cost-of-living vastly outpaces funding and puts a squeeze on spending priorities.

“President (Donald) Bobbitt also recognizes that Arkansas ranks last in the Southern Regional Education Board in faculty pay on the four-year university level and 14th out of 16 at our two-year colleges. Recruiting and retaining top-notch faculty is getting more difficult and has a direct impact on student success and quality of education. He sees faculty compensation as a critical System-wide issue,” Hinkel said.

Southern Arkansas University in Magnolia and Henderson State University in Arkadelphia each saw about a 21% increase in tuition and fees over five years. SAU’s tuition is $8,196 and HSU’s is $8,116, according to the ADHE.

University of Central Arkansas in Conway has raised tuition just 15% during the five-year period. It started with the highest in the state in 2011 at $7,183. Since then, it’s raised rates an average of 3% each year. The cost is now $8,224, the fourth highest in the state.

“We take the cost of attendance at UCA very seriously and know how important it is to our students and their families,” said UCA President Houston Davis. “We do our very best to ensure that as little burden as possible is placed on the shoulders of our students. Not only do we have the lowest increase in tuition and fees over the past five years, but we also had no increase in 2015.”

On the College Scorecard, UCA alumni receive salaries higher than the national average at $36,500.

Arkansas State University in Jonesboro raised rates 18% since 2011, reaching $8,200 this year. The salary after attending, however, is below the national average at $31,700. 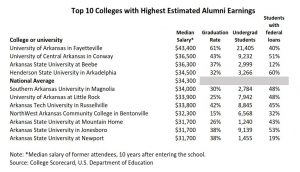 NWACC, at 13%, had the smallest increase in tuition over the last five years, averaging a 3% rise each year. Its tuition is now $4,633, the second highest in the state for two-year colleges, and its median salary after attended is listed by the College Scorecard as $32,300.

“Our college employees and trustees have worked very hard since I arrived to keep down the cost of attending NWACC; this report validates those efforts,” President Dr. Evelyn Jorgenson said in a statement.

University of Arkansas – Pulaski Technical College has the highest cost for two-year colleges at $5,280, and it also showed the deepest increase at 77% since 2011.

“Though we had a significant tuition increase last year, UA-PTC kept its tuition artificially low for many years prior and delayed significant tuition increases,” said Tracy Courage, director of communications, public relations and marketing. “Our former Boards of Trustees was always hesitant to increase tuition by very much because we serve a high number of low-income families and wanted to stay affordable.”

Courage said the latest increase is meant to offset $2.5 million in projected revenue loss due to a decline in enrollment.

“Our Board of Trustees did this only as a last resort,” she added. “We sought increase community support through a millage, but our community did not support a millage. As a result, UA-PTC continues to be one of the few two-year colleges in the state that receives no financial support from the community it serves. Our only source of revenue is state funding and the tuition and fees that students pay.”

Salary after attending for UA-PTC is $27,900, according to the scorecard. The school joined the UA System on Feb. 1.

There are 22 two-year, public colleges in Arkansas, according to ADHE. The ADHE did not list information on two- and four-year undergraduate programs at the University of Arkansas for Medical Sciences, but the College Scorecard lists the school as having 711 undergrad students and the salary after attending as $61,400.