The future is here in terms of robotic applications used by Wal-Mart Stores, Tyson Foods, Baldor Electric Co. and other large Arkansas employers. But a shortage in robotic techs is holding back more automation, said Tomas Blodgett, director of operations for automation and robotics at Multi-craft Contractors in Springdale.

Blodgett was one of five speakers to discuss workforce shortages in the trades at the Northwest Arkansas Workforce Summit held in Springdale on Monday (Nov. 7). More than 500 educators and business professionals attended the first of what will be a two-day session dedicated to workforce shortages in many trades.

He said there are several companies that could expand their operations if they had the necessary workforce. A partnership between MCC, the Fayetteville Chamber of Commerce, NorthWest Arkansas Community College and other industry players is launching a Robotics Training Center in early 2015 aimed at next generation competency training such as robotics technicians. The NWA Robotics Training Center, located in downtown Fayetteville in the former Chamber offices at 123 W. Mountain St., has a capacity of 48 students per month.

“We are negotiating with two robotics manufacturers —Fanuc and ABB (parent company of Baldor Electric in Fort Smith) — to become a certified and accredited training center for their robot systems. It’s a one-week class and once a student graduates they are certified as a Fanuc or ABB robotic technician, which includes maintenance and operations. To get it the students must pass an academic test and a skills test,” said Fayetteville Chamber CEO Steve Clark.

He said one of the robotic systems uses a camera and the technician must be able program the robot to recognize certain traits in items it can see with the camera.

“We hope to be up and running in early in the first quarter. We did get a grant of $450,000 from the Department of Commerce … to purchase the eight robots that will be used in the training. These are robots like what is being used at Pace Industries and Superior Industries,” Clark told Talk Business & Politics. 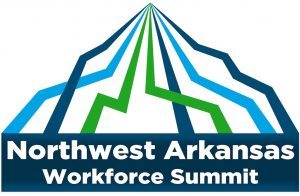 He said the Fayetteville Chamber got involved in this program because its employers need the help.

“We have to think about automation in the 21st Century the same way we thought about what the computer chip did in the last century. The impact can be very similar. Automation can help companies with efficiencies which allows more time for future innovation. Our goal is to create a workforce than can help facilitate automation and also attract other businesses here,” Clark added.

Blodgett said there is little to no similar training in the many areas of the United States – except in Michigan which moved to robotics in the auto industry in the 1980s. He said if this region can have an accredited training center it will not only help the local employers automate faster, but it will be a magnet for others to follow.

Blodgett said there are about 2,000 industry robots now in use within a 100-mile radius of Springdale. He said one project MCC is working on would double that number almost instantly if the workforce was available to support the transition. MCC is involved in robotics because it sets up manufacturing robotic systems and sells robots and the set-up and servicing for the two major manufacturers, ABB and Fanuc.

Blodgett said one of the visioning robots used at the Veterans Administration Hospital in Northwest Arkansas sorts pharmaceuticals by color, size or other characteristics which are programmed into the machine. It does the work of pharmacy technician. He said 15 years ago the machine would have cost about $80,000, but now is priced at $26,000.

“We have secured one instructor for the robotics training center, but we still have one more to hire. The companies have been supportive of this program with the understanding that the first slots in the classes go to local manufacturers who have personnel to train. But anyone can apply for the training, understanding that local industry gets priority on the open slots. We hope to be able recruit nationally after a few months,” Clark said.

Blodgett said the industry realizes the need for such training, but state and federal funding has lagged behind.