Editor’s note: Scott Cashion is a history professor at the University of Arkansas at Fort Smith. Opinions, commentary and other essays posted in this space are wholly the view of the author(s). They may not represent the opinion of the owners of Talk Business & Politics.
–––––––––––––––––
For much of Arkansas’ 180 year history, the Democratic Party has been the party of record in the state. From the time of the Conway-Crittenden duel noted in a previous article, until Bill Clinton left for the White House in 1993, Republicans have had a hard time gaining more than moderate support in the state.

In the years since Clinton’s departure, Arkansas, like most of its neighbors, increasingly became a red state. The rise of the Republican Party in Arkansas was slow, and not always steady, but it merits a closer look in the wake of the 2016 election.

While the Republican Party was formed in 1854, there was no party in Arkansas until the Reconstruction era. The party held its first convention in 1867, and quickly moved to gain Arkansas’ readmission into the Union following the Civil War. Powell Clayton, a carpetbagger from Pennsylvania, helped found the party in Arkansas and was rewarded with political office. Clayton was named the governor of Arkansas in 1868 once the state reentered the Union. He was the first Republican governor of the state and helped usher Arkansas through the early years of Reconstruction. When he left for the U.S. Senate in 1870, he was replaced by Ozro Hadley until the next election in 1872.

Clayton’s abrupt departure created a power vacuum within the party. The void was unsuccessfully filled by two men, Joseph Brooks and Elisha Baxter. Both ran for governor in 1872 under different banners of the Republican Party, leading to the Brooks-Baxter War. With the two rival factions at each other’s throats, quite literally at times, the Democratic Party came back to power in Arkansas and ended Reconstruction. The Republican Party’s first attempt at being the dominant party in the state ended almost before it began. Democrat Augustus Garland was elected to the governor’s office in 1874, and a Republican candidate would not ascend to this office again until 1966.

When Winthrop Rockefeller was elected governor in 1966, the Republican Party regained short-lived prominence. Rockefeller tried to exert his family’s stature and wealth to help grow the party in Arkansas to no avail. Despite being elected to consecutive terms, Rockefeller faced an increasingly hostile Democratic legislature. The brief Republican respite was broken in 1970 with the election of Dale Bumpers to the governorship.

Bumpers was the first of the “Big Three” and included David Pryor and Bill Clinton. They were called as such by political scientist Diane Blair because they were all moderate Democrats. They were moderate in that they appealed to their Democratic bases with numerous social programs, but they also garnered Republican support through fiscal conservatism. From 1970 until 1992 one of the Big Three was governor of Arkansas. At a time when most Southern states, including Arkansas, were becoming more conservative and turning to the GOP, the Big Three kept the Democratic Party entrenched in Arkansas. 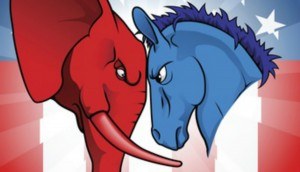 Republicans did have a brief return to power during the reign of the Big Three. Bill Clinton was defeated in 1980 after his first term by Republican Frank White. Clinton was out of touch with the Arkansas electorate when he became governor in 1979, and White seized on this running a campaign he dubbed “Cartags and Cubans.” While White broke the control of the Big Three, it was a short victory that lasted only two years. Clinton returned as governor in 1983 and remained in office until he left for the White House 10 years later.

Once Clinton was elected president, the Republican Party began to take root as the dominant party in Arkansas. Many of the Democratic Party’s up and comers went to Washington with Clinton. Without the moderate views of the Big Three to prop up the Democratic Party in Arkansas, Republicans began to fill the void. Clinton was followed by his Lt. Gov. Jim Guy Tucker who won his own term in 1994. Tucker would not finish out his term, as he was indicted in the Whitewater scandal, and stepped down in 1996. After Tucker left office, Lt. Gov. Mike Huckabee returned the Republicans to the governor’s office. He remained governor until he was term limited and was replaced by Democrat Mike Beebe.

Beebe’s first term in office saw the Democrats maintain control of politics throughout the state. The party held majorities in both houses of the state legislature, all statewide elected offices, both U.S. Senate seats, and three of the four U.S. House seats. This changed during his second term starting in 2010. The Republicans gained control of the state legislature and all statewide elected offices. Republicans were elected to both U.S. Senate seats as well as all four U.S. House seats during Beebe’s second term. The Republicans also gained an overwhelming majority in the state general assembly. Beebe was the first Democratic governor to face a Republican controlled legislature in Arkansas’ history.

Arkansas’ switch to the Republican Party was completed with the election of Asa Hutchinson to the governor’s office in 2014. The 2016 election continued this trend.  U.S. Sen. John Boozman won his race against Democrat Connor Eldridge with 60% of the vote. U.S. Rep. Steve Womack won with 77% of the vote against Libertarian Steve Isaacson. Isaacson was his main opponent, as the Democrats see it as futile to even run a candidate in that district.

Donald Trump won 60% of Arkansas’s vote against former first lady of the state Hillary Clinton. Since the election, the Republican majority in Arkansas has grown as two Democrat flipped to the GOP. With this switch, the Republicans have a supermajority in the state House of Representatives with a 75-25 edge. They narrowly missed getting this majority in the state Senate, but did maintain control with 24 out of 35 seats. It is safe to say that Arkansas’ fairly new dominant party will not lose its power any time soon.