“Propelling Downtown Forward,” the effort to develop a strategic action plan for downtown Fort Smith, has a new hashtag and a fresh set of details based on the 2014 Future Fort Smith Comprehensive Plan.

Organizers Talicia Richardson and Mitch Minnick of 64.6 Downtown introduced #PropelFS at the start of Thursday night’s (Sept. 15) stakeholders meeting from the Friedman-Mincer building as a means of soliciting citizen input to assist Gateway Planning in its work towards a first-draft strategic plan by the end of 2016.

Scott Polikov of the Dallas-based Gateway — the firm behind Rogers, Ark.’s downtown redevelopment — said the company plans to deliver a final draft for the Fort Smith Board of Directors by spring 2017. Addressing a crowd of close to 100 people at Thursday’s event, Polikov commended Fort Smith’s efforts thus far, claiming there were “a lot of cool projects already being done” in addition to the district’s history and landmarks.

Two of the major items Gateway identified as needing to be connected and built upon are the Riverfront and the U.S. Marshals Museum. Polikov said the downtown district needed “diverse residential types, more open space and trails,” and less truck traffic, though the efforts to reduce, he said, should be “addressed through a detailed and cooperative process.” Polikov assured stakeholders the proper parties were coming to the table on the issue, identifying the Arkansas Highway Transportation Department, the city of Fort Smith’s engineering department, the U.S. Marshals Museum, and the trucking industry.

While Polikov couldn’t give a price tag on what it might take to build the downtown stakeholders envisioned in the 2014 Comprehensive Plan, he did identify past client Owensboro, Ky., as a similar project, which, to date, has involved more than $100 million in public investment and $160 million in new private development. 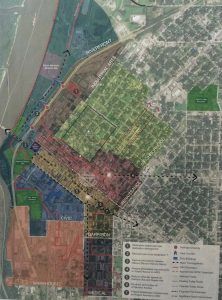 According to Polikov, the message is clear: whatever success the city seeks will depend on public and private sectors as well as Fort Smith residents coming together. Throughout the process, he said, Gateway will work with the city to find available dollars for infrastructure and to attract private investment.

“(Downtown) will need additional dollars from the private sector, but our job is to make it attractive to them,” Polikov said, adding that “great downtowns move forward because investors see the potential and are then reinforced by other investors.”

Follow are other suggestions made Thursday.
• Create “character zones” within each part of the downtown district (i.e. Riverfront, Industrial Arts, Neighborhood, Renaissance, Civic, Warehouse and Medical), and utilize Form-Based Coding.

• Connect the National Cemetery to Garrison Avenue with streetscape and courthouse landscape improvements and public art.

• Install a transient dock and RV Park connecting to the Trolley Museum and an expanded Trolley System as well as National Historic Site Trails and the Fort Smith Trails System.

• Expand the Trolley System to be “not just for tourists, but for locals, too.”

• Reinvent A and B Streets with expanded sidewalks, parking, and two-way traffic.

• Connect Belle Grove and the Riverfront to Garrison via the proposed Trolley System expansion.

• Reinvent Riverfront Drive from H Street to A Street with a 12-foot shared use path and 10-foot buffer, two lanes, and then an additional 20 feet consisting of a 10-foot shoulder and 10-foot drainage buffer; from the U.S. Marshals Museum with two lanes and a center turn lane as well as the aforementioned shoulder and buffers; and from the New Kelley Highway Extension to the Museum with four lanes, a median, and the same shoulder/buffers.

64.6 Downtown contracted with Gateway Planning for a strategic development plan with Gateway Planning that runs approximately eight months. The total contract was for $258,000, $50,000 of which came from the city’s Central Business Improvement District (CBID). The remainder comes from private donations.