Editor’s note: John Burris is a former member of the Arkansas Legislature. Opinions, commentary and other essays posted in this space are wholly the view of the author(s). They may not represent the opinion of the owners of Talk Business & Politics.
–––––––––––––––––––

Governor Asa Hutchinson is storming the trenches of the remaining liberal bastions in the state he was elected to run. Perhaps that’s a tad dramatic, but none more so than the defenders of the Capitol Zoning Commission, the History Commission and the Governor’s Mansion Commission.

Those are the trenches our governor, along with the legislature, decided were in need of new accountability and less power.

It’s conservative reform in the heart of out-of-touch liberalism, meaning urban Pulaski County. Though outrage from a few has been loud and uniform, the reform to each commission appears to be common sense. It means more control by elected representatives of the people and less control for over-empowered commissions filled with unelected political appointees.

The Capitol Zoning Commission escaped mostly harmless.  Appeals are now made to the director of the Department of Heritage, instead of the courts. This means if the commission disallows an average Joe from renovating a building in our downtown area, Joe doesn’t have to hire a lawyer and go to court. Now he can appeal to an accountable public official charged with protecting our state’s heritage and history. Lawyers get less money. Courts are less crowded. Accountability rests with those who are they themselves accountable.

The History Commission staff was transferred to the Department of Heritage, where all functions and responsibilities will stay the same. The commission itself, meaning the seven middlemen who enjoyed spending state dollars with no executive or legislative oversight, was eliminated. They opposed their loss of control, as did their spouses, led by Tom Dillard. He’s a columnist for the statewide newspaper and husband of commission chair Mary Dillard. He even published columns criticizing the governor’s efficiency measure. His wife’s role as a commissioner was never mentioned. 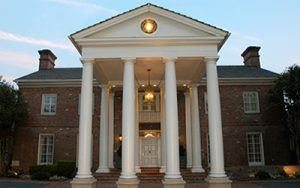 Maybe his word limit prevented him from disclosing his obvious bias. Or, maybe it’s just another sign of how some love to have power but never accountability. The state is more than Quapaw and Hillcrest, as charming as they are. If we believe the public is to have a say in its public things, the decisions should be made by people the public chose to represent them, rather than an unaccountable few.

That brings us to our governor, Asa Hutchinson, chosen by the people to run our ship of state. He manages Medicaid, school funding, and other billion dollar things. For that responsibility, he’s afforded a respectable salary and public housing for him and his family. The house, referred to as a mansion, was constructed in the 1950’s. It’s only slightly older than my own home and still younger than many of its neighbors, meaning it’s hardly the Downton Abbey of Arkansas.

Governor Huckabee added a large entertainment hall on one of its sides. It’s a nice space and has been used appropriately over the years for entertaining and charitable fundraising, while still serving as the governor’s residence.

But the governor who governs the whole state does not run his own home. Instead, an unelected commission manages the mansion. Governor Sid McMath, back in the day, didn’t want to ask taxpayers for money to build him a house. So he appointed a commission to do it for him. The house was funded and built, but the commission never left. They built the home. Why not decorate it, after all?

Governor Hutchinson asked and was given permission to change the role of the commission. Instead of control, they now have only input and oversight. The governor will oversee the house, its events and its decorations. Kind of like the Obamas at the White House, and the Bushes before them. But liberals have been in a righteous fervor of moral outrage, seemingly fit for the days of real state crises, like in 1874 when Brooks dragged Baxter out of the Old State House and surrounded it with cannons.

But the reality is this fight, like most, was almost entirely prompted by personality. Commission members, mainly Kaki Hockersmith, have clashed with the Hutchinson’s style and event planning and liked things the way they were. She should, since she was paid tens of thousands of dollars by the Governor’s Mansion Association (a separate but related entity) to decorate the home, all while serving on the Governor’s Mansion Commission. There’s no crime. It’s worth noting.

Since clashes of personality cannot be avoided, the side with the better arguments ought to win. Efficiency and common sense count. Voters trusted Asa Hutchinson to run Medicaid, schools and highways. They should be comfortable letting him manage a small home with a large dining room attached. If the people are so appalled by Asa’s color of curtain, they can un-elect him soon enough.

Meanwhile, if the mansion is an event center, the law should be changed to reflect it and the appropriate staff hired to run it. Otherwise, liberals just want a subsidized event hall to gather for charity vanity projects, complain about Tom Cotton and talk about the good ‘ole days. It’s never really about the children, as politicians love to claim. It’s always about the adults. In this case it’s about commission members who lose their titles and perceived authority.

As for those independent and therefore unaccountable commissions, less is better. Hopefully more will be abolished. It saves taxpayers money and puts responsibility with the people who earn it and risk losing it.

Emptying the trenches was long overdue.