The event’s featured speaker was Dr. Stephanie Ho, a Fort Smith physician who said she is one of three Arkansas doctors performing abortions and one of two who perform medication-induced abortions. Ho said she had quietly supported abortion rights until recent legislation inspired her to become an advocate. She said laws not based on evidence are being passed by legislators who are not physicians or scientists.

Among the laws she criticized was Act 1086 of 2015, which requires women to meet with the doctor performing the abortion 48 hours before the procedure. It also requires women to be advised of the risks of performing an abortion, and of the pain the fetus is likely to feel when abortions are performed after the 20th week of pregnancy. The law also requires a woman to be told that the effects of abortion-inducing medication potentially may be reversed.

Ho said most of her patients “have been contemplating their decision for days to weeks” and that the 48-hour rule often stretches out the wait to four to seven days because she travels between Fayetteville and Fort Smith.

She said the claim that abortion drugs can be reversed is not based on evidence, forcing her to lie to her patients.

Lawmakers “try to discredit us and cast doubt on our ability to consent our patients,” she said. “And their ultimate goal is to convince women to remain pregnant by using my voice to misinform. Luckily, abortion providers still have the right to free speech, and I along with my colleagues have been very forthcoming with relaying our lawmakers’ true intentions.”

The rally came six days after the annual March for Life by abortion opponents. That march featured speeches by three women – one who regretted her two abortions, one whose mother had been counseled to abort her but didn’t, and a rape victim who chose not to have an abortion despite the child’s severe abnormalities. Also speaking at the March for Life were Gov. Asa Hutchinson, U.S. Sens. John Boozman and Tom Cotton, and U.S. Reps. French Hill and Bruce Westerman.

Vance Marquis of Jacksonville, who opposes abortion, attended the Rally for Reproductive Justice Saturday. He told a reporter, “We believe life, all the stages of life, are valuable because everybody’s made in the image of God, so all lives need to be protected from the time they’re conceived to the time they die. … Science has proved that over and over again, that is a baby inside the mother. It has its own DNA, and that’s why it needs to be protected.”

Two state legislators, Sen. Joyce Elliott, D-Little Rock, and Rep. Vivian Flowers, D-Pine Bluff, addressed the crowd. Elliott said, “I cannot tell you the almost volcanic reaction I have today when somebody dares to say to over half the population of this country, ‘We will tell you what you may or may not do about the autonomy of your own body.’”

While the event’s focus was on abortion, speakers also spoke at length about what they said were other forms of “reproductive justice.”

Evelyn Rios with the Transgender Law Center said that people like her have suffered discrimination regarding job opportunities and health care and are afraid to seek the care and help they need. She said transgender people fear going to the police after suffering from a physical assault and said medical schools don’t train students in dealing with transgender patients. She said she’s had trouble finding a gynecologist who is accepting and aware of transgender issues. 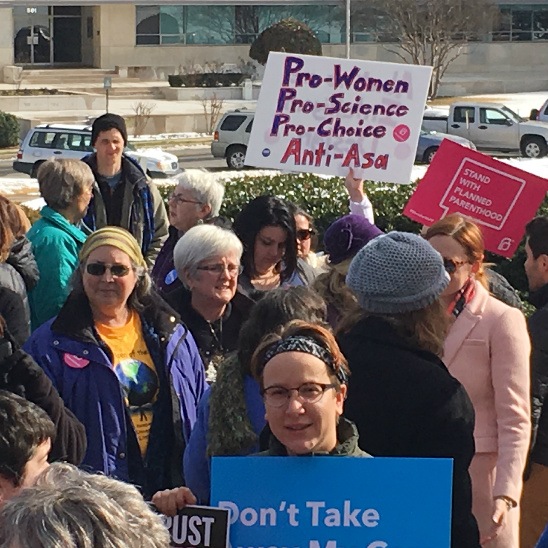