Editor’s note: The Arkansas Tourism Ticker is sponsored by the Arkansas Hospitality Association.

The Arkansas Tourism Ticker is managed by Talk Business & Politics, and uses the following three measurements to review the health of the state’s tourism industry.
• Hospitality tax collections – prepared food tax and lodging tax – of 17 Arkansas cities (cities listed below along with collections for each city);
• Tourism sector employment numbers as reported by the U.S. Bureau of Labor Statistics; and
• Collections of Arkansas’ 2% statewide tourism tax.

Results for the January-October ticker report are:
• +7.58%
Gain in combined January-October hospitality tax collections in 17 Arkansas cities compared to the same period in 2014; 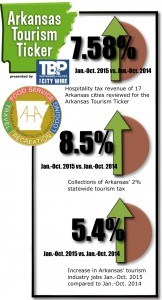 During the January-October period, none of the 17 cities surveyed for the Arkansas Tourism Ticker posted a year-over-year decline in collections. Gains for the eight month period ranged from a low of 0.6% in Texarkana to a high of 24.6% in El Dorado.

STATEWIDE TOURISM TAX
Collections of Arkansas’ 2% tourism tax in January and October totaled $12.925 million, up 8.5% compared to the $11.912 million in January-October of 2014. Collections of the tax through October have set a record each month except for May. The May tally missed setting a new record by $120.

Of the eight metro areas in or connected to Arkansas, the Bureau of Labor Statistics provides tourism employment data on five. The Fort Smith and Memphis-West Memphis areas were the only metro areas to see travel and tourism sector employment declines in the January-October period compared to the same period in 2014. The Memphis-West Memphis area is the only one of the metro areas to see a decline in 2015 compared to 2010. Following are comparisons of the monthly employment averages in the January-October period. 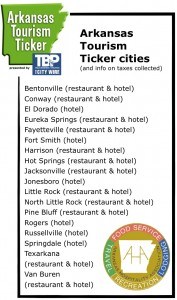