Three key measurements of Arkansas’ leisure and hospitality sector ended 2014 in positive territory, with 16 of the 18 Arkansas cities reviewed showing year-over-year hospitality tax gains, according to the inaugural report of the Arkansas Tourism Ticker.

The ticker is managed by The City Wire, and uses the following three measurements to review the health of the state’s tourism industry. The ticker is using 2010 as the baseline of comparison.

Topline results for the December ticker report are:

The Arkansas Tourism Ticker will be produced every two months, or six times a year.

Of the eight metro areas in or connected to Arkansas, the Bureau of Labor Statistics provides tourism employment data on five. All five of the areas show employment gains in 2014 over 2013 and 2010. Following are the December tourism labor numbers for the five metro areas.
Northwest Arkansas

“Unfortunately, there is not a broad measure of the health of Arkansas’ tourism industry. Our goal with the Arkansas Tourism Ticker is to correct that oversight. We are confident that leaders in the tourism and travel industry will help us in that correction,” said Michael Tilley, editor and co-owner of The City Wire.

Richard Davies, executive director of the Arkansas Department of Parks and Tourism, said the three measurements used for the ticker are “probably the best barometers of tourism.”

“I think it’s a good idea,” Davies said of the ticker. “As we’ve talked about before, tourism seems to be forgotten about because it’s not in one place with a bunch of smokestacks. It’s urban and rural as well.”

Kalene Griffith, head of the Bentonville Convention & Visitors Bureau, said Bentonville uses its tax money to not only advertise the city, but to invest in “the city’s tourism infrastructure.” Such investments include soccer fields, renovations to the downtown square, the “Wayfinding Signage” project, and Lawrence Plaza Ice Rink and Splash Park.

“In the past 15 years, the Bentonville Advertising and Promotion Commission has invested over $7 million into the city’s tourism infrastructure,” Griffith said.

Maryl Koeth, executive director of the Van Buren Advertising & Promotion Commission, appreciated that the ticker looked at collections from restaurants and hotels.

“As you know, prepared food is heavy on local customer revenue flow, whereas hotel receipts are exclusively new money from customers outside the area. The prepared food receipts speak more to the health of the overall economy,” Koeth said.

THE NEW GOVERNOR
The 41st annual Arkansas Governor’s Conference on Tourism is set for the upcoming weekend (March 8-10) in Texarkana, and will be the first conference for Gov. Asa Hutchinson (R).

Davies, Griffith and Koeth expressed confidence that Hutchinson will be, as have past governors, supportive of the industry. In a Jan. 23 letter addressed to state tourism industry supporters, Hutchinson said he looked forward to helping continue the “dynamic growth” of the sector.

“From the hills of my northwest Arkansas hometown to the rich cultural heritage of southeast Arkansas, we’ve been blessed with an unbelievable array of parks, museums, historic districts, festivals, lakes, rivers and forests,” Hutchinson said in the letter.

Davies said Hutchinson will be willing to try new things within the industry.

“From the conversations I’ve had with Governor Hutchinson, I think he is very supportive of tourism, and his general way of doing business seems to mesh with what it will take to stay ahead in the market – technology, trying new things, efficiency with dollars, research and working together as an industry,” Davies told The City Wire. 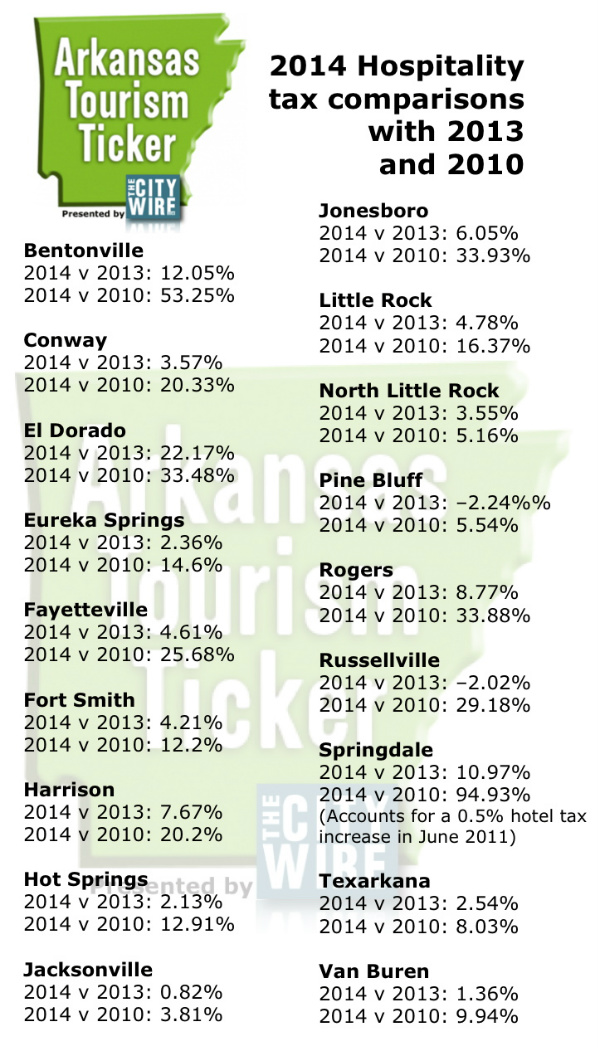